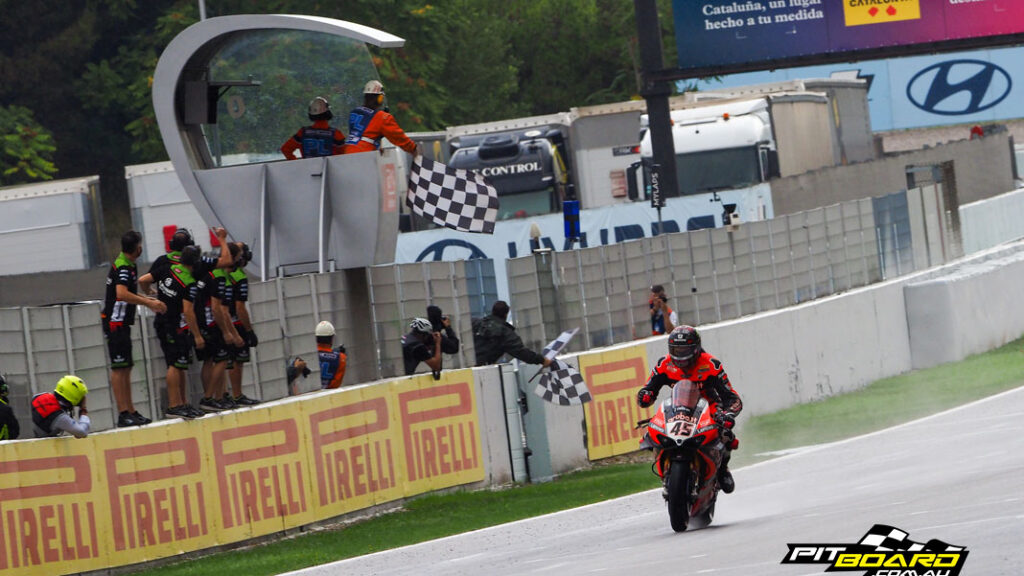 In the title fight, points leader Toprak Razgatlioglu (Pata Yamaha) retired with an electronics issue on lap 15, while Jonathan Rea (Kawasaking Racing) despite a bad start  took fourth in the race, and goes into Sunday racing with a six-point lead in the championship.  (Rea – 376 points, Razgatlioglu 370 points, Redding 323 points).

Despite a bad start that saw him back to 10th at the first timing point,  world champion Rea fought back to lead the field while behind rookie Bassani was Eventually the warring duo found their way past Rea before Bassani took the lead when Razgatlioglu pulled over with an electronics mishap. As the 20-lap race progressed, the two factory Ducati riders of Michael Ruben Rinaldi and Scott Redding (Aruba.it Racing – Ducati) found pace. In the closing stages, Redding passed teammate Rinaldi for second before making a move on the independent Ducati of Bassani for the lead, with a handful of laps to go.  Redding was the eventual winner, ahead of Bassani and Rinaldi, to claim Ducati’s first 1-2-3 finish since Assen 2012.    Rea came in fourth grasping valuable championship points after Razgatlioglu’s demise. There was a strong showing for Team HRC with Leon Haslam finishing in seventh place and Alvaro Bautista in ninth, sandwiching polesitter Tom Sykes (BMW Motorrad WorldSBK Team), with the British rider falling down the order at the start of the race, but managing a fight back for eighth.  Chaz Davies (Team GoEleven) completed the top ten, finishing just 0.008s ahead of Kohta Nozane (GRT Yamaha WorldSBK Team) who finished as the lead Yamaha rider. Nozane got a great start from 12th to fight in the lead group in the early stages of the race. Garrett Gerloff (GRT Yamaha WorldSBK Team) did not take the race start after a crash on the Sighting Lap as he lost the rear of his Yamaha YZF R1 machine on the kerbs on the exit of turn 10 and on the run through turn 11, damaging his bike and preventing him from taking the start of the 20-lap encounter. 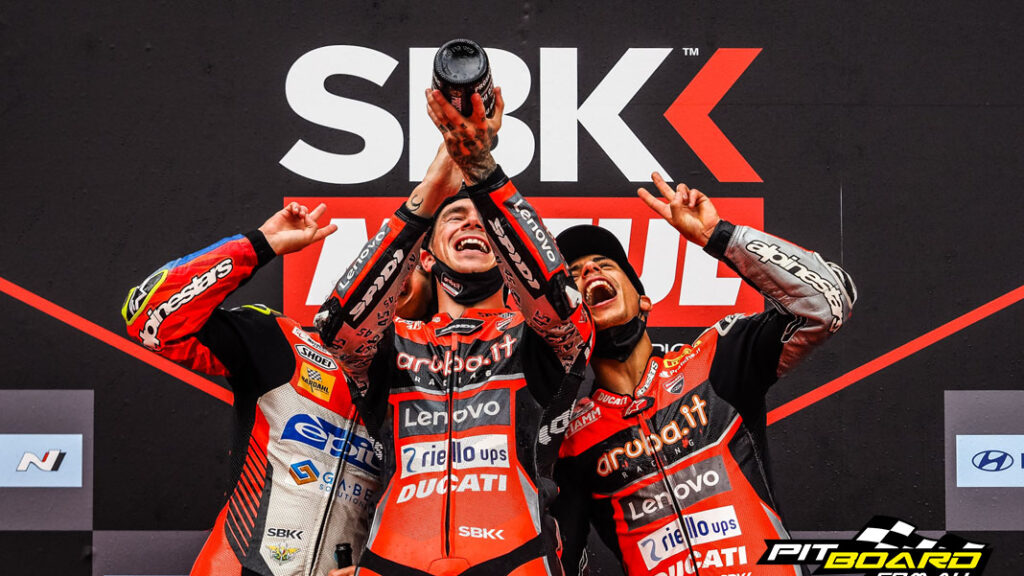 Scott Redding: “It was one of those races I didn’t expect to win. I thought I was going to finish today a little bit upset because I didn’t make a step. Then it all just started turning around. I got more and more hungry as it went on. At the beginning of the race, off the start, I got big wheelspin as we crossed the start line and made me drop back. I had no grip in the beginning. In one moment, I said ‘you’ve got to do something. If you go down, you go down, but it is what it is’. I planned a little bit what I could do, and I had Michael as a target which was quite good for me.”

Tissot Sprint Race
There was action aplenty in the Superpole Sprint at this weekend’s round 9  of the MOTUL FIM Superbike World Championship at Barcelona’s Catalunya circuit as Jonathan Rea (Kawasaki Racing Team WorldSBK) claimed a hard-fought victory over Toprak Razgatlioglu (Pata Yamaha with Brixx WorldSBK) to win by two tenths.

Toprak Razgatlioglu (Pata Yamaha with Brixx WorldSBK) led into turn one but was soon fending off challenges from Jonathan Rea (Kawasaki Racing Team WorldSBK) and Scott Redding (Aruba.it Racing – Ducati), with Rea on Pirelli’s SC1 tyre while his rivals were on the SCX. The battle continued through the first three laps before a Red Flag on lap four following an incident at turn 11 involving Lucas Mahias (Kawasaki Puccetti Racing) and Chaz Davies (Team GoEleven), with Davies taken to the medical centre. Davies was stable and conscious following the incident but was declared unfit, before he was transferred to Catalunya Hospital for further assessment. Mahias took to the grid for the restarted race but brought his bike back to the pits three laps in.

The grid for the restarted race was based on the last completed timing point for each rider, with Razgatlioglu, Rea and Redding starting the five-lap race from the front row, with Rea starting the restarted race on the SCX tyre. The first lap of the five lap restart saw fierce racing between the lead group, but it was Rea who beat home Razgatlioglu.

Alvaro Bautista (Team HRC) was in third place after starting the restarted race from sixth place, fighting his way up to claim his first podium since Aragon 2020, a wait of 37 races, and to claim a front row start for this afternoon’s race two. Bautista had been running second ahead of Razgatlioglu but was overtaken by the Turkish star, before battling Alex Lowes (Kawasaki Racing Team WorldSBK) for the podium. Lowes claimed fourth place in the Superpole Race to secure a second row start and he will be joined by Michael Ruben Rinaldi (Aruba.it Racing – Ducati) and Axel Bassani (Motocorsa Racing); Bassani starting race two from sixth place after the highs of his Saturday podium dampened by a big crash in Sunday’s warm-up.

The Tissot Superpole Race proved to be one to forget for the BMW Motorrad WorldSBK Team with both riders retiring from the race after an incident between the two on the opening lap, with Michael van der Mark coming off his bike in the gravel while Sykes was able to bring his bike back to the pits. Van der Mark lost the front of his BMW M 1000 RR going through turn six and made contact with Sykes. Neither rider was able to take to the grid for the restarted race. Andrea Locatelli (Pata Yamaha with Brixx WorldSBK) and Kohta Nozane (GRT Yamaha WorldSBK Team) retired from the restarted race on the opening lap after an incident at turn 11, with Alex Lowes (Kawasaki Racing Team WorldSBK) and Scott Redding (Aruba.it Racing – Ducati) also involved; the incident placed under investigation by the FIM WorldSBK Stewards with no further action required. Redding had to take to the gravel with that incident and lost considerable time, finishing the race in 15th place.

Defending champion, Kawasaki’s Jonathan Rea who ran Pirelli’s SCX A0557 development option (as did the rest of the field) , could not maintain the pace of the front runners and crossed the line in sixth.  Coupled with a win in the midday Sprint and a 4th on Saturday, Rea has closed the gap on points leader Razgatlioglu to one point in the 2021 MOTUL FIM Superbike World Championship, with Razgatlioglu on 399 points and Rea on 398 points.  The next round is at Spain’s Jerez circuit next weekend (Sept 24-26) followed by Portugal’s Algarve on October 1-3 to make for a triple-header of intense competition. Race two started with drama, the red flags out on lap two of the 20-lap race following an incident involving Lucas Mahias (Kawasaki Puccetti Racing) and Tom Sykes (BMW Motorrad WorldSBK) at turn one.  Although conscious, Sykes was taken to the medical centre and was diagnosed with a head injury and concussion and transferred to Catalunya Hospital for further assessments.

In the 19-lap restart, Rinaldi made a fast start and moved into the lead ahead of Razgatlioglu and Rea. Razgatlioglu went with Rinaldi throughout the 19-lap encounter but Rea dropped back with ailing tyres. Early on Razgatlioglu held the early lead over Rinaldi, but the Turk’s dominance lasted for just a handful of laps before the Italian took control, extending his charge to the finish line to claim victory by more than 3 seconds. With Rea battling for a podium spot, he fought to keep Andrea Locatelli (Pata Yamaha with Brixx WorldSBK) at bay, but his attempts were in vain with the Italian rookie passing him on lap 10 before Scott Redding (Aruba.it Racing – Ducati) and Alvaro Bautista (Team HRC) followed through.

At the start of lap 18, Redding made a move on Locatelli into turn one for third place with Redding using the SC0 tyre, along with Rinaldi, while his rivals were on the SCX rubber. Bautista followed Redding through a lap later at the same corner. It meant Rinaldi claimed his first win since the Tissot Superpole Race at Misano. Alex Lowes’ (Kawasaki Racing Team WorldSBK) came to an end at turn two on lap one after he came off his Kawasaki ZX-10RR, and headed to medical centre where he was diagnosed with a left wrist contusion. Jonas Folger (Bonovo MGM Action) and Sydney’s Lachlan Epis (OUTDO TPR Team Pedercini Racing) were mixed up in a back grid drama, with Epis retiring from the race after 7 laps. Mahias joined the restarted race but brought his bike back to the pits and retired from the race, while Loris Cresson (OUTDO TPR Team Pedercini Racing) also did not finish the race. Michael Ruben Rinaldi: “I’m really happy about this win because we arrived from a difficult moment. Yesterday after the rain I was a little bit upset because I knew we had a strong pace in the dry. We managed third which wasn’t bad. I said, ‘today is my day, I need to go for it’. The tyre choice was difficult actually because everyone was going for the soft, but last year I saw there was too much drop at the end of the race. I took a risk, but it worked, so really happy about that.”

A new chapter begins for the biggest and most successful path on the Road to MotoGP in 2022. The FIM...
Advertisment