Being a fan of the Yamaha R1 and having owned three, the chance to ride Marco Melandri’s WSBK machine exactly 10 years ago on one of my favourite tracks was a dream come true – and made even cooler by the fact that I watched him race on the bike the day before…

I had a bit of time to look over the Yamaha before riding it and what a work of art. By far the sexiest machine on the grid with loads of exposed carbon-fibre and titanium, the YWST R1 was about as distanced as you can get from the road bike…

Check out our other Throwback Thursdays here…..

Melandri is quite short, so my expectations were that I would simply not fit on the bike. But I was wrong. Aside from the rearsets being way too high for me, I actually found the bike a good fit as I try the number 33 bike for size a few minutes before my allocated session.

The bars are flat and pulled back GP style, the seat height not radically tall, the dash a good easy layout and the tank feels much narrower than the bulky streetbike tank. The bike feels nothing at all like a stock R1. If anything it feels like a large version of a TZ250 GP bike to sit in. Really surprising…

As Silvano, the Chief Engineer, fired the beast into life while the mechanics smiled at me (I’m sure the journo day is good entertainment for them) I got a little nervous, understandable I guess. I had not seen the track for almost 12 months and I had never ridden a WSBK bike.

I rolled forward, click up, fan the clutch and motor down pit lane with hundreds of people watching me. No pressure then? That sweet drone of the big bang engine is really exaggerated on the WSBK bike and by the time I exited pit lane it hit me – this is really happening! Melandri’s R1!

I knew the track very well and there is no time to muck around. I treated the first lap as a warm up lap in a race for example, so by the time I cross the chute for the first time I was trying hard. I’d already decided that this may be my only chance to ride these bikes and that I was going to have fun…

The top end of the bike shocked me, where the street bike drops away this thing starts to really haul – at that point the fastest top end I have ever felt on any bike and mades our domestic superbikes feel like 600s. Braking hard for turn one from around 300km/h I was given my very first experience of what $60,000 brakes feel like. The feeling was like nothing I have experienced and the stopping power incredible. At least 30 per cent more than anything I’ve ridden, I couldn’t imagine what a MotoGP bike must be like…

The back shifting was cool – I just clicked up and the bike revved itself and dropped down the gears allowing me to focus on braking and turning, something normal these days. The initial turn-in is ultra light and fast, quicker than all the bikes on the day as it turns out, and the biggest surprise for me was how soft the suspension is. The forks were very soft, even by a street set-up, but that was how Marco liked it apparently.

Braking hard for turn one from around 300km/h I was given my very first experience of what $60,000 brakes feel like.

Wayne Gardner rode the Ben Spies bike in 2009, he found the bike difficult to turn between initial turn and full lean but this problem had been solved – Marco’s bike falls graciously on its side and remains super planted. The grip from the SC1 WSBK Pirellis was insane and at that point I was cranked over further than I’d ever been.

Picking up the throttle is so easy. The Yamaha was the smoothest fuelling machine there and completely seamless, even from first gear corners. As soon as the throttle was cracked there was no jump, just smooth incredible torque and drive as the fat rear tyre hooks up while the unobtrusive electronics do their thing.

All up one of the best motorcycling experiences of my life and it only lasted 15 minutes. I guess that is all it takes to have a good time!

The bike is so quick off the corners I felt like I was being fired out of a cannon. Shifting via the quickshifter was smooth and the run-on into corners was amazing – there was very little engine braking but it comes in before the apex as the rpm drops – helping pull the bike into a nice tight line. Then it is point and fire off the turn, riding the back wheel to take full advantage.

The dynamics of the Yamaha made it a great racer. It was really nimble and fast steering, so it would’ve been great to fight for positions on and it fired off corners at almost any rpm. Really, a sensational bike to ride with an incredible top end to match.

As I came over the back dip for the second time I got a scare! Marco has the wheelie control set-up to work at high rpm but for a plonker like me who short shifts it isn’t working. I almost flipped the bike in fourth gear at about 200km/h and go for rear brake – but the lever is only for show. Marco runs no rear brake – at all! Doesn’t use it… Phew…

Well I got the bike back in one piece and was grinning like a mad man and hugging the crew – they were stoked to see someone so excited as well. All up one of the best motorcycling experiences of my life and it only lasted 15 minutes. I guess that is all it takes to have a good time.

Modifications to the machine for WSBK racing from the homologated model include different camshafts, pistons, valves, an enlarged radiator for extra cooling and the addition of an oil cooler. The 2011 YZF-R1 had no rear sub-frame but incorporates a strengthened frame. The exhaust was unique, and was developed in partnership with Akrapovic. The standard fuel tank was also been replaced with a lightweight version with an increased capacity, within FIM regulations.

The bike featured the latest Magneti Marelli (MHT) electronic systems with over 30 sensors on the bike to monitor variables such as temperature and pressure of air, oil, water and fuel. The temperature of the brakes and the tyres were also measured, as well as brake pressure, suspension travel, speed, acceleration, throttle position, camshaft position and crankshaft position. The swingarm was also developed purely for the WSBK racebike.

Many other details had been modified in parts and body design, a variety of carbon and titanium bits and pieces awere used that made the Yamaha WSB R1 one of the most sophisticated bikes on the grid.

For 2011, development was focused on further improved weight balance of the bike, resulting in again a further optimisation of fuel tank position as well as a power increase and further electronic systems improvements for traction, anti-wheelie and torque control as well as engine brake control.

Further regulation changes to the 2011 racing bike also include the use of more production parts such as fuel injectors, fuel pump and fuel regulator which also had an effect on the fuel injection mappings used in 2011. 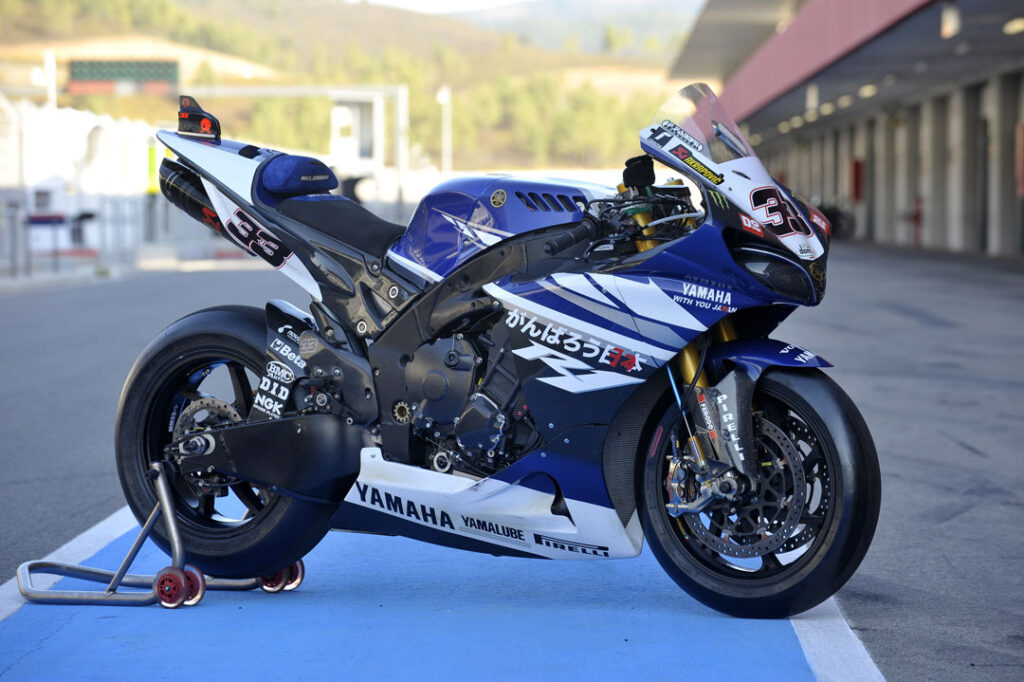 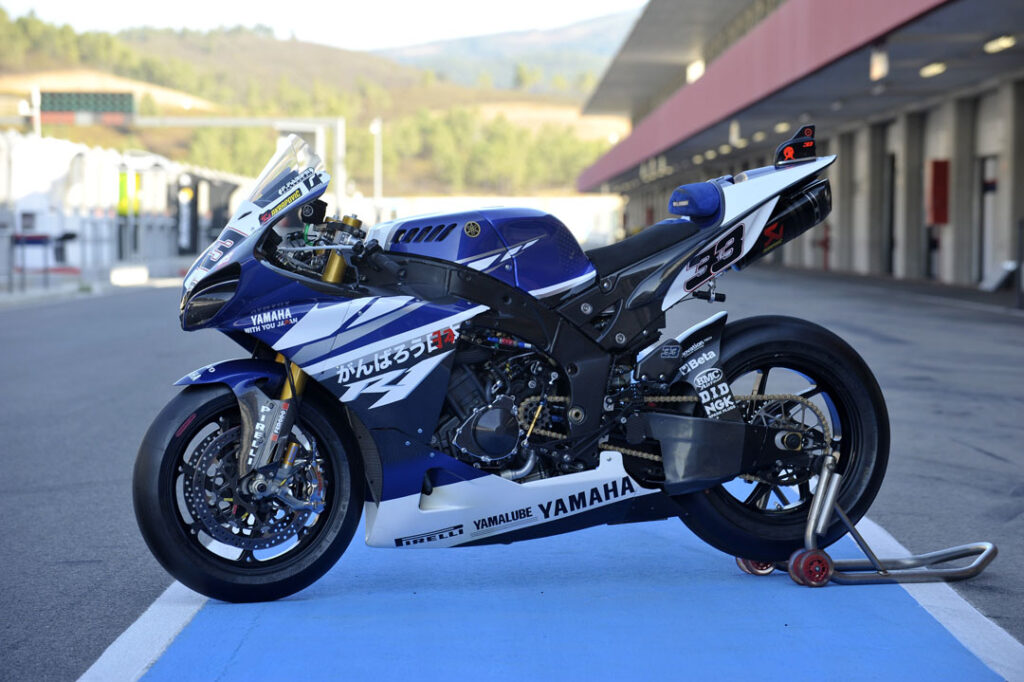 A chance to ride the TBR D&D QBE Suzuki Katana that Steve Martin has made so famous at the Phillip...
Advertisment