Race Reports: All The Action From MotoE Rd3 At Mugello

The FIM Enel MotoE™ World Cup produced a thriller in its first race at Mugello, with Dominique Aegerter (Dynavolt Intact GP) taking victory despite starting the final lap in fifth. Matteo Ferrari (Felo Gresini) was back on top in Race two, taking victory with a small margin over another huge group battle.

The intrigue began before the race had even started, with riders arriving on the grid on wet tyres before changing to slicks as the rain at Mugello abated. When the lights went out, Kevin Zannoni (Ongetta Sic58 Squadracorse) got the jump from the middle of the front row and led the field up the hill to San Donato, with Ferrari emerging second from the opening corners and pole-sitter Aegerter third.

Ferrari then went underneath Zannoni as they ran through the Arrabbiata corners, as Aegerter and Niccolo Canepa (WithU GRT RNF MotoE™ Team) duelled over third. When they arrived at Scarperia, Aegerter headed down the inside of both Ferrari and Zannoni to take the lead, while a bit of bodywork was sent flying due to some contact behind between Granado and Canepa.

For his trouble, Aegerter was swamped as his rivals slipstreamed him as they ran back up the main straight to start Lap 2, but he reclaimed first on the brakes at San Donato. Granado was slicing his way through the pack too, and he would hit the front when he went underneath the Swiss rider as they turned into Materassi, just down the hill.

It looked like they might form something of a breakaway, but their battle for position mean that Ferrari was back in touch as Aegerter hit back for the lead on Lap 3 at Scarperia. Marc Alcoba (Openbank Aspar Team) emerged as a contender for victory and, astonishingly, he made it a four-wide run up the hill towards San Donato at the start of Lap 4 too. Ferrari emerged in front after all that, from Granado and Alcoba, with Aegerter dropping from first to fourth in a matter of corners.

Despite looking to have made an on-the-run adjustment to his brake lever, and then ceding fourth position to Mantovani, Aegerter refused to give in. He made a big lunge under brakes at San Donato on the fifth and final lap of the race and that put him all the way back into the race lead, with Ferrari in second place.

On the drag to the finish line, Aegerter beat Ferrari to another MotoE™ victory by only 0.033 seconds, with Mantovani, who is only riding this weekend as an injury replacement for Bradley Smith, slipstreaming Granado for third as they reached the finish line, the gap between them just 0.007 seconds. But with his DSQ after the fact, it’s the Brazilian who takes 16 points. A final-lap pass helped Mattia Casadei (Pons Racing 40) to fifth, now fourth, and consigned Alcoba to P5 but the latter was still only 0.983 seconds from the win.

Canepa was next up ahead of Miquel Pons (LCR E-Team), and Zannoni is classified ninth after losing touch with the leading group on Lap 2. Hector Garzo (Tech3 E-Racing) rounded out the top 10 on track, now P9. Another race win means the Swiss rider has increased his lead atop the FIM Enel MotoE™ World Cup standings, to 17 points over Granado after the Brazilian takes third. What awaits on Sunday? Race 2 kicks off at 15:30 (GMT +2) so tune in to find out! 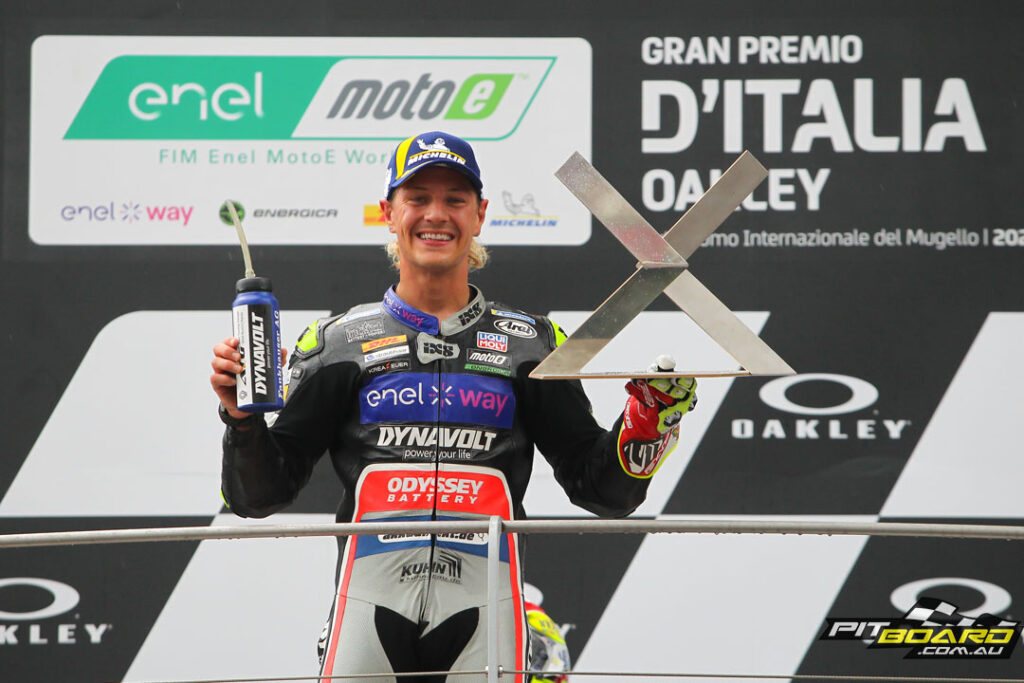 Race Two
The win was a classic: Matteo Ferrari (Felo Gresini MotoE™) was back on top in Race 2 of the FIM Enel MotoE™ World Cup at Mugello, taking victory with a small margin over another huge group battle as the Italian played his cards to perfection on home turf. Dominique Aegerter (Dynavolt Intact GP MotoE™) took second, crossing the line at exactly the same time as Marc Alcoba (Openbank Aspar Team) but taking P2 thanks to setting the fastest lap. And the eagle-eyed Swiss rider spotted something else: passes under Yellow Flags earlier in the race.

After a thorough review from the FIM Stewards, changes of position were applied. For Alcoba it was three positions, demoting him from the podium and meaning Miquel Pons (LCR E-Team) takes third place. For Niccolo Canepa (WithU GRT RNF MotoE™ Team) and Eric Granado (LCR E-Team) it was one position each, so Canepa is classified sixth and Granado eighth. But let’s rewind…

Kevin Zannoni (Ongetta SIC58 Squadra Corse) made the best start and it was he who led the field out of San Donato for the first time, from Aegerter and Ferrari. Just behind that trio, Mattia Casadei (Pons Racing 40) fell as he exited the corner, while Hikari Okubo (Avant Ajo MotoE™) was also on the deck later on the opening lap. He would be taken to the medical centre with pain in his right leg, but was passed Unfit for showing he’d sustained an impact to his head, so he’ll need a check up to be passed fit for the next round.

Meanwhile at the front, Zannoni continued to lead into the second lap, but Aegerter was swamped as they all slipstreamed towards San Donato and the Swiss rider dropped back to sixth. Ferrari had taken over second spot while Pons was up to third and Alcoba fourth, a rise of six positions relative to where each had qualified. Ferrari gained one more position – the most important one – when he outbraked Zannoni at San Donato on Lap 3, as Alcoba rode around the outside of Pons just behind them. Canepa was fifth at that point while Aegerter would soon have a battle for sixth position on his hands with closest rival in the standings, Granado.

The end of the main straight was clearly the prime overtaking zone but Zannoni found resistance when he tried to go around Ferrari in a bid to reclaim first position at the start of Lap 4. Pons and Canepa, on the other hand, were able to slip underneath Alcoba and push him back to fifth spot. Of course, San Donato was not the only place where overtaking was coming thick and fast in MotoE™, and Pons proved that when he moved ahead of Zannoni through Scarperia/Palagio on Lap 5. That promoted the Spaniard to second, and it also allowed Ferrari to stretch his advantage slightly.

Then Alcoba, who was already back in front of Canepa, passed Zannoni at Bucine. That much was straightforward, but they nearly touched on exit and the Italian had to pick up his bike, which caused him to drop yet more positions. Zannoni was fifth when the crossed the stripe to start the final lap, and eighth by the time they were on their way out of San Donato and back down the hill.

In all of that, Aegerter had risen from seventh to fourth, but the previous day’s race winner was not done. He nabbed third from Alcoba as they went through Bucine for the final time, but it would still come down to a drag to the finish line. Ferrari won by 0.529 seconds, but it was astonishingly close in terms of who would be declared second. Aegerter and Alcoba were separated by 0.001 seconds according to timing, then that was revised to a dead heat for second and the former was officially given second using fastest lap times as tie-break. For Alcoba, it still seemed like his first MotoE™ podium, but later came the heartbreak and the position penalties, giving Pons third although the Spaniard didn’t make it to parc ferme.

WithU GRT RNF MotoE™ Team rider Andrea Mantovani is now classified fourth after again pipping Granado on track, but with the shuffle on Saturday the Italian gains instead of losing out after the DSQ in Race 1 for low tyre pressure. Zannoni takes P5 ahead of Canepa, with Alcoba classified seventh. Granado is classified eighth, ahead of Kevin Manfredi (Octo Pramac MotoE™), and Hector Garzo (Tech3 E-Racing).

With a win and a second placing at Mugello, Aegerter’s lead at the top of the World Cup standings is now 29 points over Granado and 30 over Ferrari. After six hectic races to start the season, it is time for the FIM Enel MotoE™ World Cup field to take a break before their fourth round of the season at the Motul TT Assen on June 24-26, so join us then for more!

Maitland, NSW will host Round 5 of the 2022 Penrite ProMX Championship presented by AMX Superstores this Sunday. Officially kick-starting...
Advertisment