As preparations for the 2022 MOTUL FIM Superbike World Championship campaign gear up, the provisional permanent entry list has been revealed with 24 riders confirmed for a full-time WorldSBK campaign with five manufacturers represented on the grid.

After winning the 2021 Riders’ Championship, Pata Yamaha’s Toprak Razgatlioglu switches from his traditional #54 to plate #1 for 2022, alongside team mate Andrea Locatelli. After six years at the top, Jonathan Rea switches back to #65 for the year ahead at Kawasaki Racing Team WorldSBK as he looks to reclaim the title in the chase for a seventh crown. Once again, Rea will be joined by Alex Lowes who will be hoping to bounce back from an injury-hit 2021 season.

The BMW Motorrad WorldSBK Team will run another new line-up in 2022 as Scott Redding joins the team alongside Michael van der Mark. It means the team will be on their third different line-up in as many years to compete on the BMW M 1000 RR.

Both Honda and Ducati have undergone rider line-up changes throughout the winter as well. Alvaro Bautista sensational returns to the Aruba.it Racing – Ducati for 2022, alongside Michael Ruben Rinaldi, with the Spaniard hoping he can replicate the form he showed when he first joined WorldSBK with Ducati in 2019. Rinaldi will embark on his second campaign with the factory Ducati squad, hoping to add to his three wins from 2022.

Team HRC will have an all-rookie line-up in 2022 after bringing in Iker Lecuona and Xavi Vierge from MotoGP and Moto2 respectively to compete on the CBR1000RR-R machine, with Team HRC looking to add to their podium tally from 2021 and claim a first victory since their return as a full-factory outfit.

BMW have also expanded the number of BMW machines on the grid to four with the Bonovo Action BMW squad, with Eugene Laverty being joined by the returning Loris Baz. Like at BMW, there has been an expansion of the satellite team as MIE Racing Honda Team, with Leandro ‘Tati’ Mercado returning for a second season at the team and Hafizh Syahrin joining the squad.

There is a new team on the 2022 grid as Yamaha Motoxracing join the Championship having previously competed in WorldSSP and WorldSSP300. They will run Spanish rider Isaac Viñales in 2022, after he made the switch from Orelac Racing VerdNatura; his place will be taken by Czech rider Oliver König. As well as teams, two riders have made the switch from WorldSSP to WorldSBK. Philipp Oettl joins Team GoEleven for 2022 while Luca Bernardi will become the first rider to compete in WorldSSP300, WorldSSP and WorldSBK when he takes to the grid with Barni Spark Racing Team.

GRT Yamaha WorldSBK Team have retained the same line-up for 2022 with Garrett Gerloff returning for his third campaign alongside Kohta Nozane, who enters his sophomore campaign. After an incredible rookie campaign in 2021, Axel Bassani returns with Motocorsa Racing as he looks to build on his single podium finish while Lucas Mahias returns for a second season with Kawasaki Puccetti Racing, while there is one seat still to be announced at TPR Team Pedercini Racing, with the Italian team going down to one bike in 2022.

Fourteen nationalities have been confirmed for 2022, up from 12 on the entry list in 2021. San Marino will be represented for the first time since Alex De Angelis in 2017 when Bernardi takes his spot on the grid. For Malaysia, Syahrin will be the country’s first full-time representative on the grid and the first since Cletus Adi Haslam at Johor in 1993. The 23 riders on the grid will compete for five manufacturers: four will ride BMW bikes and another four on Honda machinery. Yamaha are the manufacturer with the most bikes on the grid in 2022, with six YZF R1 machines while there will be five Ducati Panigale V4 R bikes and five Kawasaki ZX-10RRs. 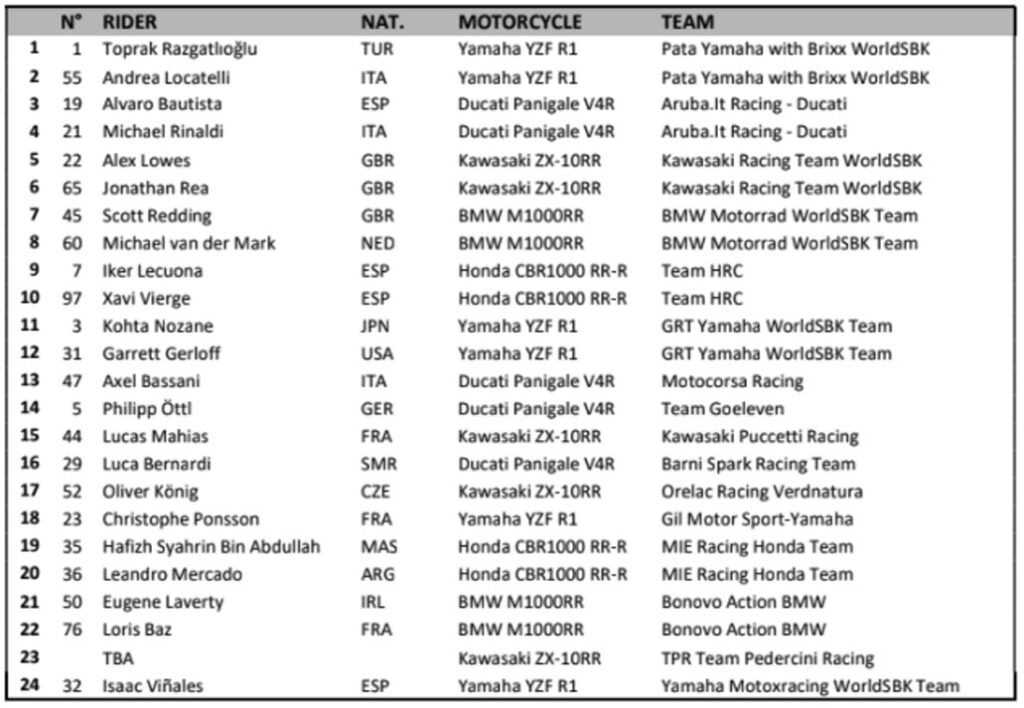 Previous articleAllerton & Staring To Ride With Gaerne Boots In 2022
Next articleFIM MiniGP Japan Series To Begin This Year!