Jorge Martin (Pramac Racing) stormed to a phenomenal first pole position of the season under the glorious lights of Losail International Circuit, beating 2021 Rookie of the Year rival Enea Bastianini (Gresini Racing MotoGP™) to the top by 0.147s at the Grand Prix of Qatar. Report: MotoGP

MotoGP Q1
Brad Binder (Red Bull KTM Factory Racing) pinched top spot ahead of Quartararo after the Frenchman just got shuffled out at the out of FP3. The South African had already sat inside the Q2 places, but his seventh and final lap saw him move ahead of the reigning World Champion with a 1:53.512 and increase the tension.

Johann Zarco (Pramac Racing) had been in the red as he posted a time attack, but unfortunately for the Frenchman, he passed through the yellow flags after Darryn Binder (WithU Yamaha RNF MotoGP™ Team) crashed at Turn 2 and his lap was cancelled. Quartararo also lost a lap, but his to a moment that saw his foot off the peg, although he improved next time round.

There were also late attempts from Miguel Oliveira (Red Bull KTM Factory Racing) and rookie Marco Bezzecchi (Mooney VR46 Racing Team), but neither could quite find those few extra tenths to get themselves into the top two on the timesheets. 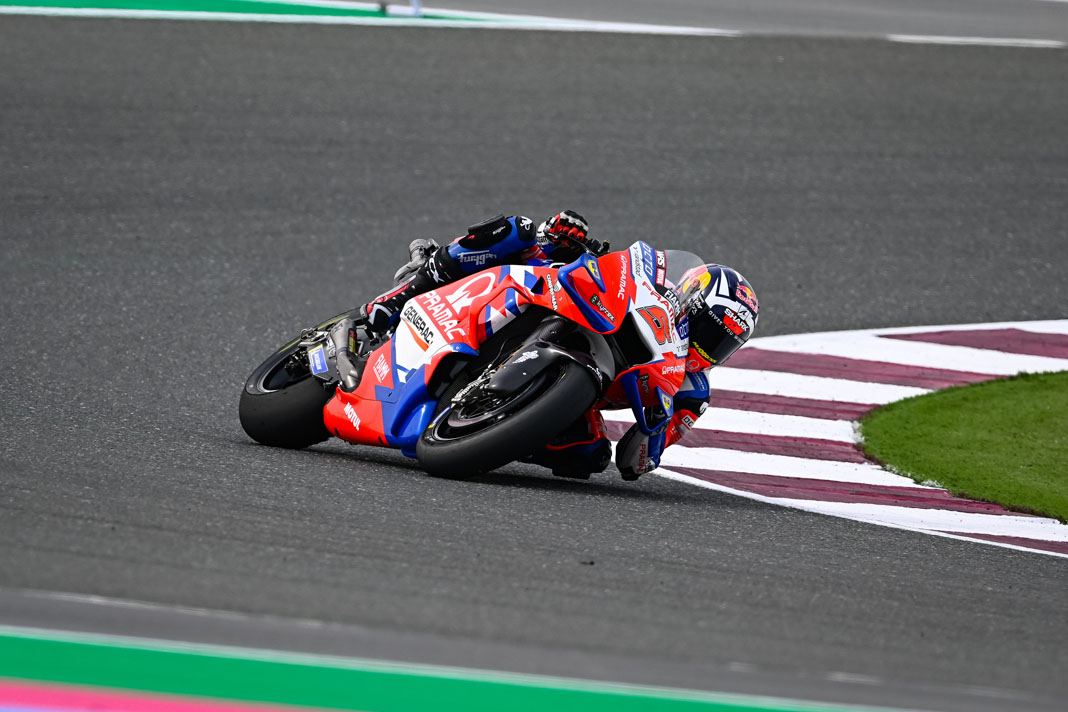 MotoGP Q2
Shadowing 2020 World Champion Joan Mir (Team Suzuki Ecstar), Marc Marquez set the first benchmark time – a 1:53.566 – but he wouldn’t stay top for long. Jack Miller (Ducati Lenovo Team) emerged as the pacesetter after the first runs were completed, and the Australian was less than a tenth clear of a different Repsol Honda: Pol Espargaro. Martin was third, Marc Marquez fourth and Bastianini P5 ahead of the final push.

Tensions were high under the lights heading into the final six minutes, all set for the first pole position battle of the season. Francesco Bagnaia (Ducati Lenovo Team) and Marc Marquez were first to emerge back out of pitlane, the latter getting his RC213V hooked onto the back of Pecco’s GP22. Halfway around the lap, Pecco was 0.018s under teammate Miller’s time, and Marc Marquez just 0.015s off. The tables turned through the third split as Marquez was a tenth quicker than provisional pole, and Pecco half a tenth. At the line, it remained so and it was Marquez who went pole by 0.128s, with the number 63 forced to settled for second.

It wasn’t over though, with red sectors galore on the timing screens – Miller, Pol Espargaro and Martin were all on fire, as well as Bastianini and Aleix Espargaro (Aprilia Racing). Tucked up behind the Repsol Honda of Espargaro, Martin leapt to P1, with Miller going third and Brad Binder slotting into P4.

Attention then turned to Mir and Pol Espargaro, with neither able to challenge the front row, but Bastianini was on course to. Keeping it together, the ‘Beast’ just missed out on pole but takes second his first front row. That means it’s a sophomore 1-2 with Martin leading Bastianini, and Marquez in third. Martin also makes it three poles in a row for Ducati at Losail – the last two of which are his – and seven poles in a row for Ducati overall.

Miller was shuffled off the front row after Bastianini’s late time but the Aussie makes it three Ducatis in the top four, with Aleix Espargaro bagging a top five for Aprilia. Younger brother Pol Espargaro lines up alongside in P6, with Brad Binder coming through Q1 to bag P7.

Mir is the leading Suzuki in P8. The Hamamatsu factory have looked like the team to beat but Mir and Free Practice 2 pacesetter Alex Rins (Team Suzuki Ecstar) had a quieter Saturday in P8 and P10 respectively, with Bagnaia sandwiched between the two and also looking for more on Sunday.

So where are Monster Energy Yamaha MotoGP™? Quartararo starts his title defence in 11th, and that’s one place ahead of teammate Franco Morbidelli as Lusail’s most successful manufacturer looks to turn things around on race day.

The Martinator takes the first MotoGP™ pole position of the season, as we now get set for race day under the lights. Tune into the premier class race at 18:00 local time (GMT+3) to see who rises highest in the desert, with the stage set for another stunning showdown. 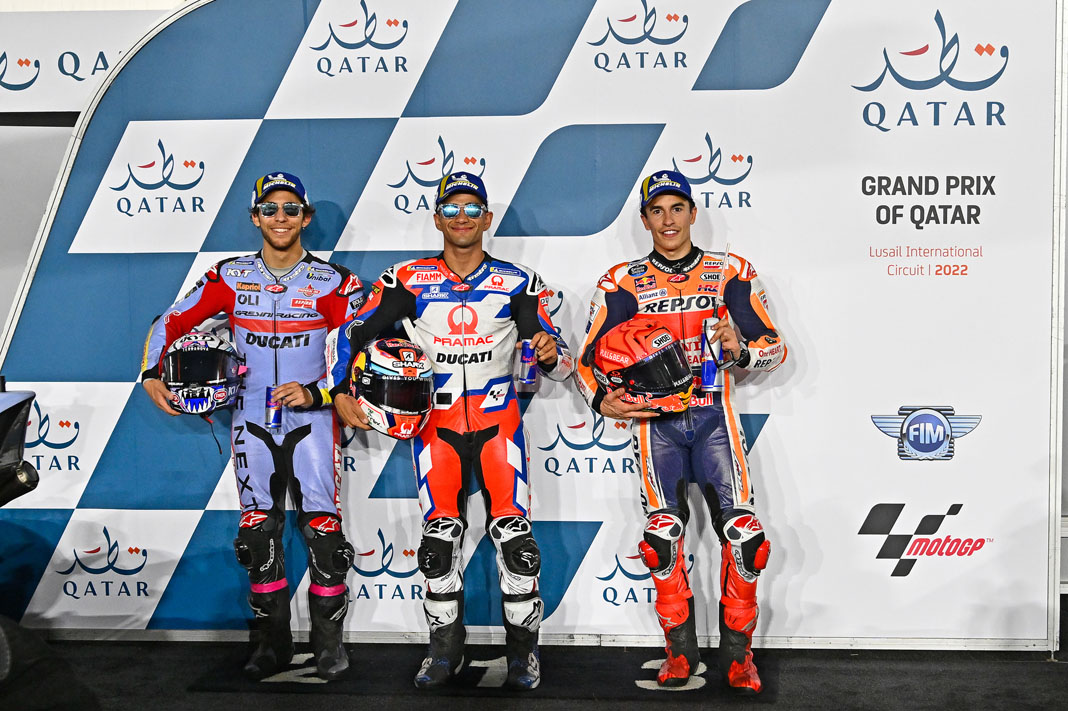 Jorge Martin: “Yeah it feels good to be on pole position but I’m still not 100% happy because we are missing a bit on race pace still. We have a lot of work to do this evening to find these one to two tenths to fight for the victory. Happy with my performance, we did an amazing lap and happy with the team. Tomorrow starting from pole, try to manage the tyre and understand the race because it will be a tough one with a lot of fast riders, but yeah, we will try our best and fight for the victory.”

Moto2 Q2
The early session table topper in the pole position battle was rookie Filip Salač (Gresini Racing Moto2™) from Cameron Beaubier (American Racing) and Arbolino, as Somkiat Chantra (Idemitsu Honda Team Asia) suffered an early crash at Turn 5 – the Thai rider went to the medical centre for a check-up, and was declared unfit for a broken finger.

Double 2021 Lusail winner Lowes then leapt to P1 as the yellow flags were shown for a Pedro Acosta (Red Bull KTM Ajo) crash at the final corner. The reigning Moto3™ World Champion was all ok but his maiden Moto2™ qualifying session was over, and he’ll have a mission on Sunday to move through.

Jake Dixon (Inde GASGAS Aspar Team) then set a time good enough for the front row but it was later chalked off for a yellow flag infringement, as compatriot Lowes increased his advantage at the summit. No one was able to beat Lowes’ time, but Vietti went closest on his final flying lap before the late drama hit and Lowes’ lap was cancelled for exceeding track limits at Turn 15, which handed Vietti pole position.

Rookie Salač put in a mightily impressive performance to front the second row of the grid in P4, and the Czech rider has Ai Ogura (Idemitsu Honda Team Asia) and Augusto Fernandez (Red Bull KTM Ajo) for company on the second row. Dixon will launch from P7 alongside Q1 graduate Aldeguer (MB Conveyors Speed Up) and Aron Canet (Flexbox HP40), with Acosta starting P10 for his first Moto2™ race after that final corner crash…

Celestino Vietti: “I feel good, I didn’t expect this qualifying. I knew we could fight for the first six or seven positions but I didn’t expect this result. We worked well this weekend and the test, we tried many things. For qualifying, we caught some things which helped me make a faster lap time. We have to work tonight to try to make a consistent race, it’s important. I think tomorrow will be a very big group race. A lot of riders are going fast so we have to see what we can do in the race.”

Moto3 Saturday
Izan Guevara (Gaviota GASGAS Aspar Team) has taken his maiden Grand Prix pole position in style with a late lunge to the top in the Grand Prix of Qatar, putting in a 2:04.811 to deny Q1 graduate  Ayumu Sasaki (Sterilgarda Max Racing Team). 2021 Qatar GP winner Jaume Masia (Red Bull KTM Ajo) starts from the outside of the front row in P3.

Moto3 Q2
Fresh from finishing fastest in Q1, Sasaki was the early pacesetter in Q2 and his initial advantage stood at 0.5s – the fastest lap of the weekend at that stage. Dennis Foggia (Leopard Racing) closed the gap to 0.2s on his second flying lap as a lot of the riders piled into pitlane, but there were only four riders within a second of the top heading into the final five minutes.

A gaggle of riders crossed the finish line within tenths of each other, and Guevara was just able to grab P1 from Sasaki. Masia claimed P3 with Andrea Migno (Rivacold Snipers Team) slotting in ahead of Foggia, who slipped to P5. Yamanaka and McPhee’s strategy to go out ahead of the big group worked well as they line-up P6 and P7 for the opening race of the season.

With many Australians showcasing their skills abroad in a range of disciplines both on-track and off-road, our new column focuses...
Read
ASBK News

Mike Jones has ripped through to take pole at Wakefield Park from Cru Halliday and Wayne Maxwell under clear skies....
Read
ASBK News

While Wakefield Park turned on some early sun, the cloud closed in and made for pleasant, but not hot conditions...
Read