Day 1 of MotoGP action in 2021 is in the history books, and leading the way on Friday at the Barwa Grand Prix of Qatar is Ducati Lenovo Team’s Jack Miller as the Australian picked up where he left off. 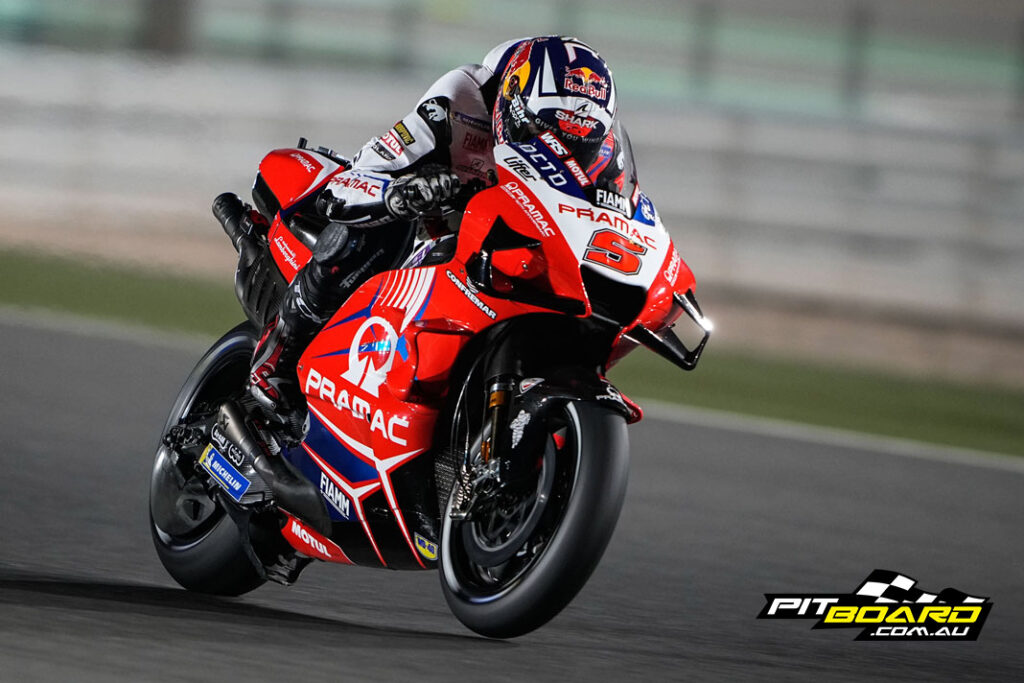 Miller’s 1:53.387 was just 0.007s away from the all-time lap record, and teammate Francesco Bagnaia made it a Borgo Panigale factory 1-2. An infinitesimal 0.035s split the two red machines, with Fabio Quartararo (Monster Energy Yamaha MotoGP) completing the top three after ending the day 0.188 off Miller.

After a scorching FP1 was completed earlier in the day, the Losail floodlights were switched on for FP2 and Miller, Bagnaia, Aleix Espargaro (Aprilia Racing Team Gresini) and Alex Rins (Team Suzuki Ecstar) all almost immediately set laptimes quicker than Franco Morbidelli’s (Petronas Yamaha SRT) FP1 pace. That was before the Red Flag came out due to track conditions, with some debris scattered across the track on the start/finish straight. However, after a quick clean up operation, the MotoGP™ riders were back out with one thing on their mind: securing a place in the top 10 and therefore a provisional place in Q2.

Aleix Espargaro was the first rider to venture into the 1:53s under the evening lights and briefly went an incredible seven tenths clear, before Rins then cut the deficit to just under half a second. It then fell a little quieter at the top but with just under 15 minutes to go on the opening day, Quartararo slotted into within a tenth of Aleix Espargaro to make it four manufacturers in the top four: Aprilia, Yamaha, Ducati, and Suzuki. Soft front and rear rubber was the choice for pretty much every rider as the first shootout of the year began.

On his next lap, Quartararo made good on his earlier threat and did demote Aleix Espargaro to P2, with Quartararo’s fellow Monster Energy Yamaha MotoGP rider Maverick Viñales taking over in P3. Johann Zarco (Pramac Racing) and Valentino Rossi (Petronas Yamaha SRT) were next to climb the ladder into P5 and P6, with rookies Enea Bastianini (Esponsorama Racing) and then Jorge Martin (Pramac Racing) enjoying some time in the top 10 too.

With nine minutes left, Bagnaia then took charge and did so by an almighty 0.275s. That lap was within half a tenth of Marc Marquez’s (Repsol Honda Team) all-time lap record, a 1:53.380, and Miller was next to challenge as he crossed the line within just 0.007s of Marquez’ time and took over in P1. It was soon a Ducati 1-2-3 as well, with Zarco going 0.199s behind Miller and the top 10 positions chopping and changing. 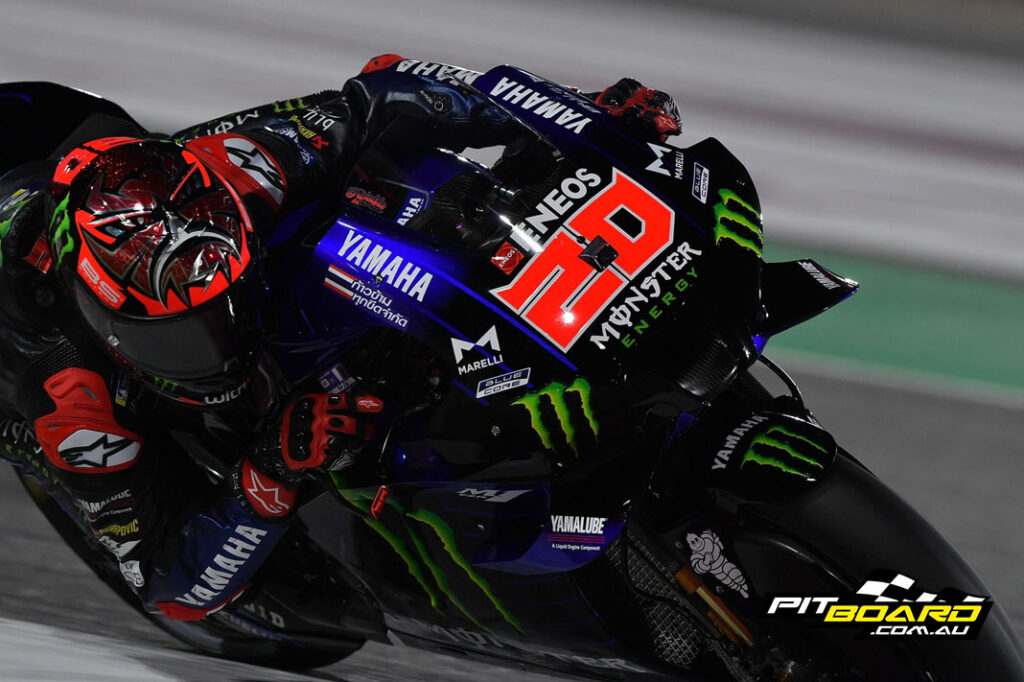 Quartararo was then glowing the timing screens with red in the opening three sectors, but the Yamahas were losing touch in the last sector as the superior grunt of the Ducatis kicked in. Nevertheless, El Diablo was able to grab P3 to break the Ducati trio apart. Bagnaia then threatened to reclaim top spot but Pol Espargaro’s (Repsol Honda Team) second crash of the day, this time at Turn 15, meant he couldn’t complete his lap due to yellow flags.

In the end then, it’s Ducati and Miller who take first blood in 2021 and Bagnaia is forced to settle for second. The Italian makes sure it’s a Bologna 1-2 at the top though, with Yamaha looking good and Quartararo the quickest YZR-M1 rider so far in third. Zarco is looking like a serious contender on the GP21 too and finishes Friday in P4, with Rins going well on the soft tyres – something that bodes well for Suzuki to shrug of their sometime Achilles’ heel of one-lap pace – to claim P5.

Viñales and Morbidelli were close in sixth and seventh, respectively, finishing within three tenths of Miller as Aleix Espargaro slipped to P8 at the end of play. Valentino Rossi finished inside the top 10 for the second session in a row, the nine-time World Champion taking ninth, and Pol Espargaro grabbed a vital P10 despite his late tumble. Two crashes in one day aren’t what HRC’s new recruit would have been looking for, but the number 44 has some good speed.

Reigning World Champion Joan Mir (Team Suzuki Ecstar) misses out on what could prove to be a crucial top 10 place as his title defence begins, but the gap could hardly be smaller: just 0.013s. With the cooler evening temperatures allowing the riders to set their best times of the day compared to when the sun was beating down in FP1 though, the same could well happen again in FP3 – so will an automatic place in Q2 be a struggle for Mir?

As the sun fell below the horizon and the floodlights lit up Losail International Circuit, every rider was immediately able to better their morning times. Lowes was lapping extremely consistently and with 20 minutes to go, 2020’s third place finisher was over half a second clear of his nearest rivals. Roberts, last year’s polesitter, did then cut the gap to 0.4s as we started to see some riders push for quick times, with plenty of eyes turning towards the top 14 places and automatic Q2 promotion. 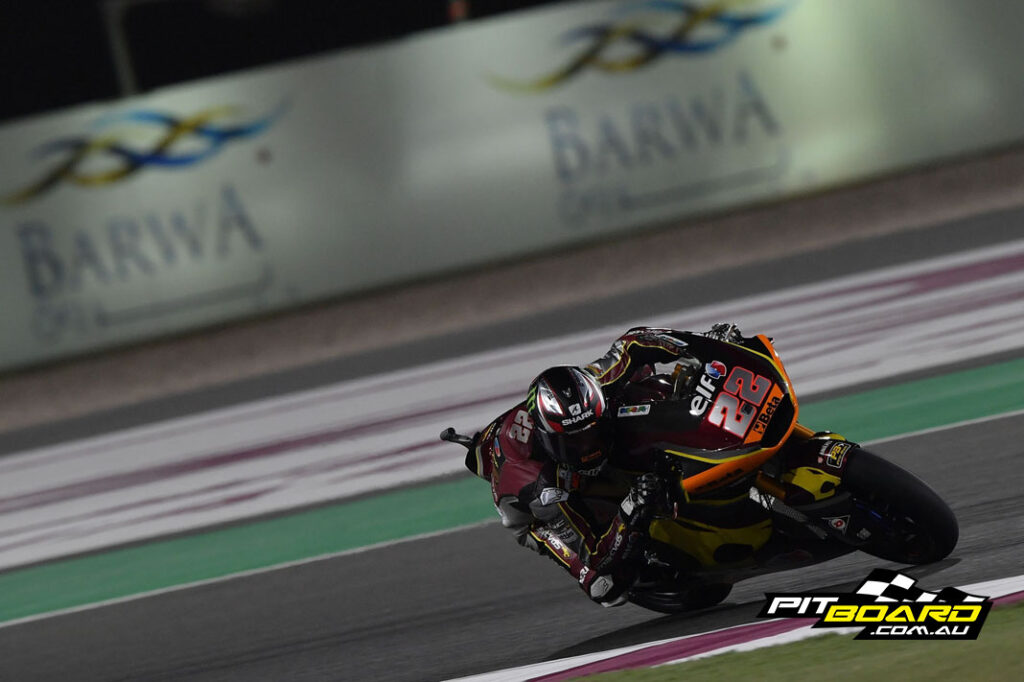 Bezzecchi then slotted into P2 with just under 10 minutes to go, the difference down to little over a tenth, but the Italian remained the only rider to get near to Lowes’ effort. Plenty of chopping and changing occurred inside the top 10, but the fastest duo from FP1 would lead the way again – this time the opposite way around.

Roberts finished P14 in FP1 but strung together a good run at the end of the day to finish third, with Xavi Vierge (Petronas Sprinta Racing) and Remy Gardner (Red Bull KTM Ajo) rounding out a very strong fastest five at the end of the first day of Moto2™ action in 2021.

After a P4 in the opening Free Practice session, Bo Bendsneyder (Pertamina Mandalika SAG Team) continued to impress on the Kalex chassis and finished Day 1 in P6, just under half a second from Lowes. Seventh fastest Nicolo Bulega (Federal Oil Gresini Moto2) rose up from P18 to safely cement a place in the top ten as Raul Fernandez (Red Bull KTM Ajo) claimed quickest rookie honours on Day 1 once again in eighth. Jake Dixon (Petronas Sprinta Racing) and Jorge Navarro (MB Conveyors Speed Up) finished P9 and P10, with the leading 10 competitors are split by 0.597s heading into qualifying day.

Moto3
After the first full day of 2021 race weekend action for Moto3™, it’s Kaito Toba (CIP Green Power) who heads the timesheets after an impressive day’s work from the 2019 Qatar GP winner. It was almost unbelievably close at the top, however, with Jaume Masia (Red Bull KTM Ajo) 0.042 back, followed by Gabriel Rodrigo (Indonesian Racing Gresini Moto3) 0.068 off, Sergio Garcia (GASGAS Gaviota Aspar Team) within 0.096 and Jason Dupasquier (CarXpert PrüstelGP) impressing to end the day just 0.099 off the top. Even the man in sixth, Niccolo Antonelli (SIC58 Squadra Corse), was only three thousandths further back…

The morning session opened with Pedrosa Acosta (Red Bull KTM Ajo) on top as the rookies continued to impress, but the veterans turned the screw on the timsheets by the end of play. Izan Guevara (GASGAS Gaviota Aspar Team) also suffered his first World Championship crash in the afternoon, but rider ok. There were no other incidents to report, helping most get in a full day of running and every rider improved by the end of play.

Behind the five riders – six, being generous about three thousands for Antonelli – within a tenth at the top, Jeremy Alcoba (Indonesian Racing Gresini Moto3) was P7 and only 0.182 off Toba, flanked by John McPhee (Petronas Sprinta Racing) as the Scotsman was 0.037 in further arrears. Andrea Migno (Rivacold Snipers Team) and Maximilian Kofler (CIP Green Power) completed the top ten, the gap between the two an infinitesimal 0.005. 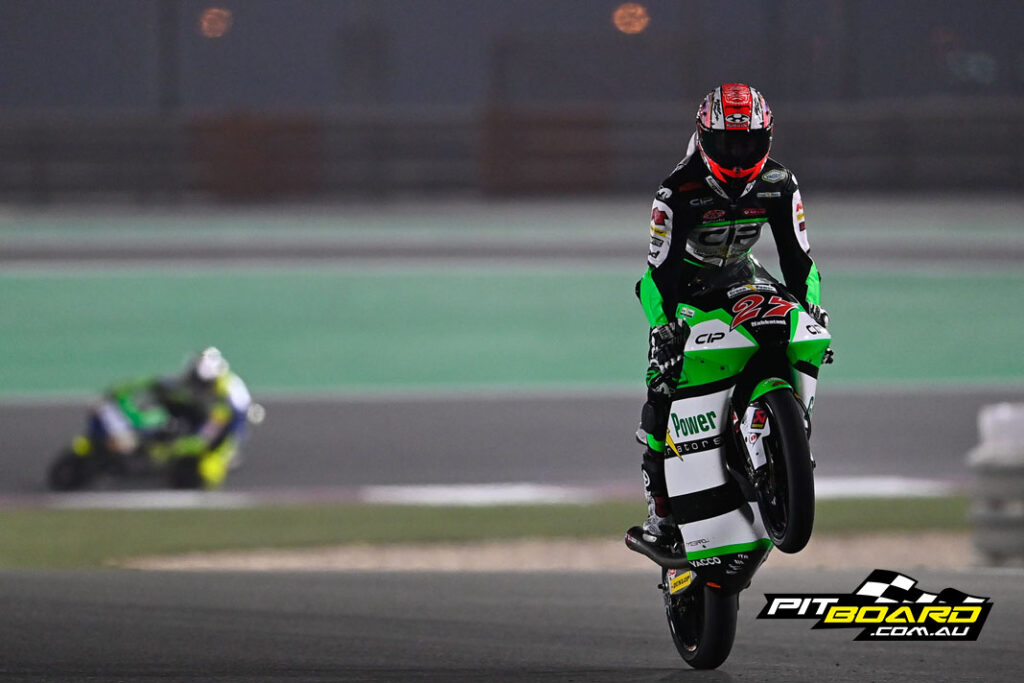 If Q2 were decided now, it would be Carlos Tatay (Avintia Esponsorama Moto3), Dennis Foggia (Leopard Racing) – who didn’t run much in FP1 – Ayumu Sasaki (Red Bull KTM Tech 3) and the aforementioned Acosta who would be heading through. Darryn Binder (Petronas Sprinta Racing) was the first to miss out, Guevara was 20th, and the returning Tatsuki Suzuki (SIC58 Squadra Corse) in P24 after Day 1, so they’ll be some of the key names looking to move forward in FP3.

Jesse Dobson will headline the Serco Yamaha outfit for the 2022 season and be partnered with Bailey Malkiewicz who makes...
Read
Helmets

There are reasons that Six-Time WorldSBK Champion Jonathan Rea chooses Arai helmets, and has done for his whole career. In...
Read
FEATURES

Jesse Dobson will headline the Serco Yamaha outfit for the 2022 season and be partnered with Bailey Malkiewicz who makes...
Advertisment