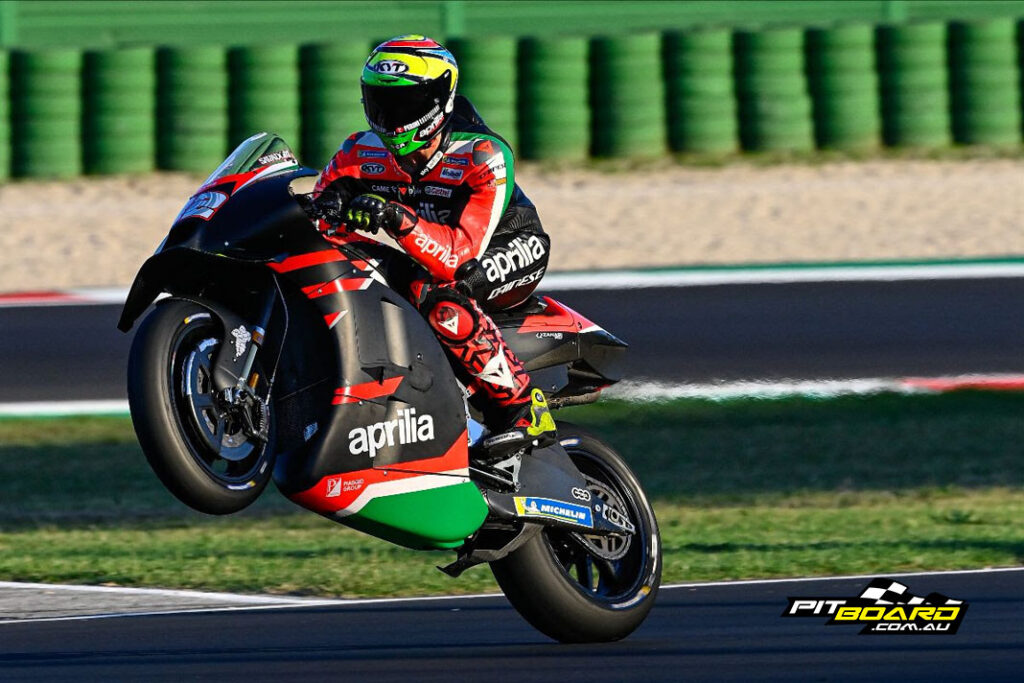 At Ducati, both Bagnaia and teammate Jack Miller were testing some new aero on the front of their machinery. ‘Pecco’ suffered a crash at Turn 10 while sporting the new aero, but the Italian was perfectly uninjured and came back out, very much proven by then setting the fastest time of the opening day. Miller was eighth, half a second back.

Stay up to date with MotoGP news here…

Jorge Martin (Pramac Racing) also completed some laps with the new aero package, with Ducati in fact having two new aero designs – the second of which divides one part into two elements. Martin’s Pramac teammate Johann Zarco had a new chassis to test, and then the Frenchman headed home and will be replaced by test rider Michele Pirro on Wednesday, as Zarco undergoes arm pump surgery.

After a crash early at Turn 6 in the afternoon session, San Marino GP podium finisher Enea Bastianini (Avintia Esponsorama) ended his day early having completed just 11 laps. Teammate Luca Marini (Sky VR46 Avintia) managed to set a 1:31.998 to grab P7, and that time is a couple of tenths quicker than the Italian set in Q1 last weekend.

Marc Marquez (Repsol Honda Team) described the Misano Test as “very important” for Honda, and test rider Stefan Bradl headed on track with a new RC213V. Eight-time World Champion Marquez – like a lot of riders – understandably waited until the afternoon to get some laps in, with the number 93 making the most of the better conditions to get some laps on the new bike on the board. The differences that can be seen on the new Honda range from the new aero and new air intake at the front, to the seat, tail unit and exhaust. 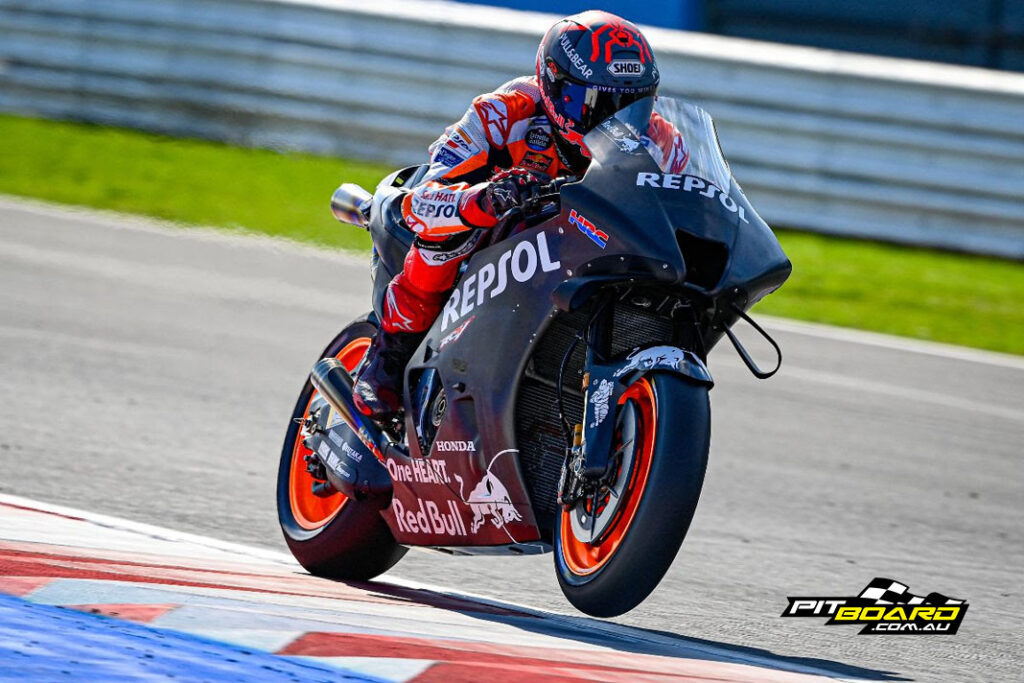 Marc Marquez completed 46 laps in the afternoon and finished P15. Pol Espargaro was second, with Takaaki Nakagami (LCR Honda Idemitsu) just behind in fourth. They set their fastest laps of the day on their 63rd and 57th laps, respectively. Alex Marquez (LCR Honda Castrol) got 55 laps in and tried the chassis recently raced by Pol Espargaro.

Over at Team Suzuki Ecstar, both Joan Mir and Alex Rins had the 2022-spec engine to test again – like we saw at the pre-season Qatar Tests. In addition, the Spaniards were testing some set-up and electronic improvements that are meant to go hand in hand with the new engine, with Mir and Rins also doing some work to gear up for the second race at the Misano World Circuit Marco Simoncelli this season. 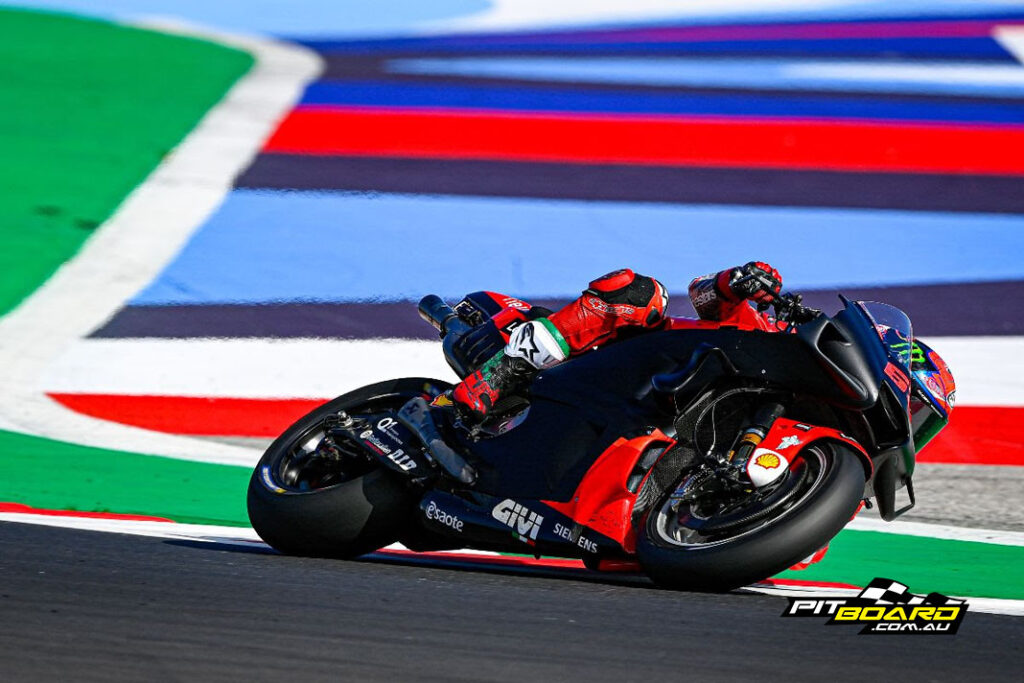 The big news over in the Aprilia garage was the 2022 aero that test rider Lorenzo Savadori was seen testing. It’s a smaller, thinner package than the one being used this year. Meanwhile, Maverick Viñales (Aprilia Racing Team Gresini) was continuing his adaptation to the RS-GP, but a crash at Turn 15 while on a personal best lap hampered his afternoon running. Aleix Espargaro finished P3 on the opening day after accomplishing 51 laps in the dry afternoon session.

After a bit of early morning operating in the damp conditions to get some weather wet time in, World Championship leader Fabio Quartararo (Monster Energy Yamaha MotoGP) was lapping on a 2022 prototype in the afternoon. A new chassis was visible and the Frenchman also had a new tail unit to try, with teammate Franco Morbidelli mainly focussing on working his way back to full fitness and getting to grips with the 2021 machine as he returns following knee surgery. 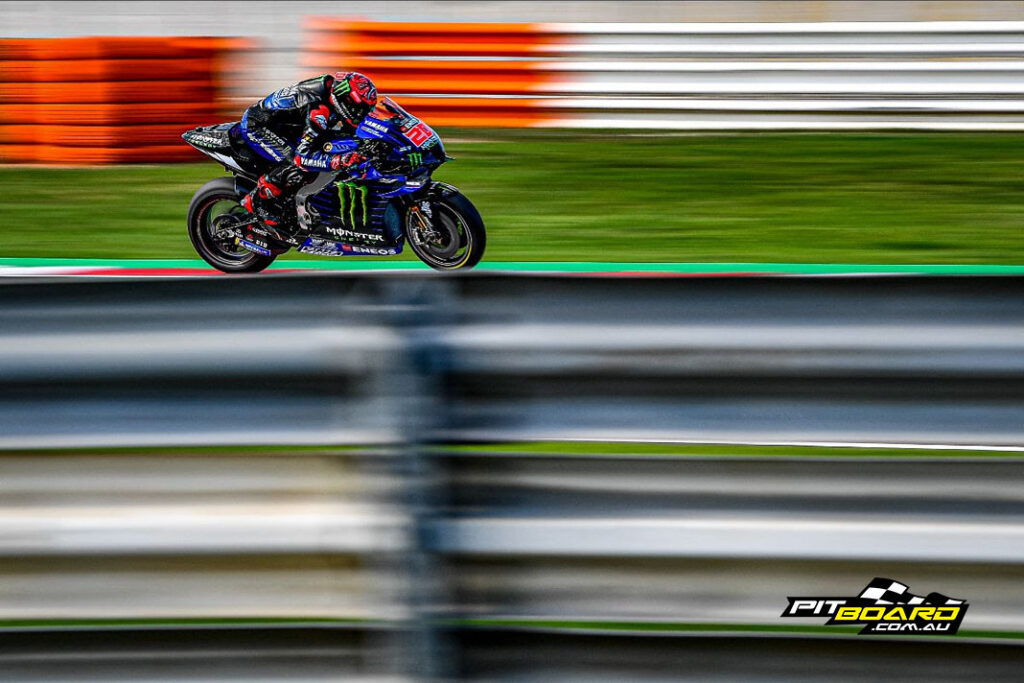 Valentino Rossi (Petronas Yamaha SRT) was another rider who was able to go faster than he did in qualifying at the San Marino GP. The Doctor finished 11th with a 1:32.170. New teammate Andrea Dovizioso continued to get to grips with the YZR-M1 after his debut weekend at Misano, the experienced Italian ended the day 19th, 1.1s shy of Bagnaia. An important and – from the outside – successful day for Dovizioso, who needs as much track time as possible to get back up to speed on very different machinery. 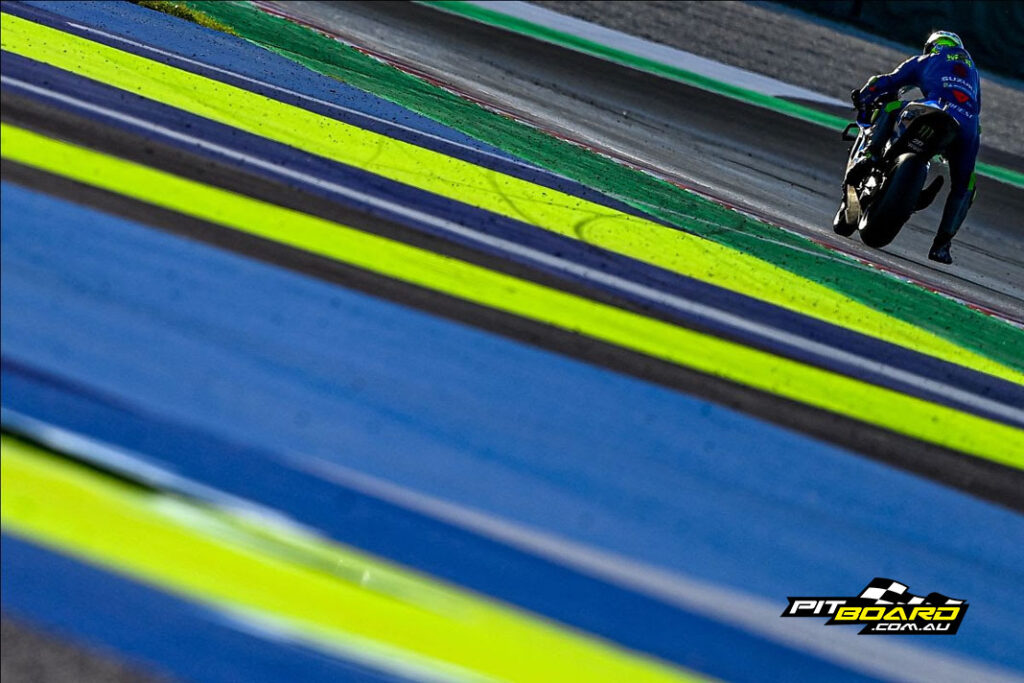 Tomorrow, meanwhile, is a big day for the Austrian factory and their new 2022 recruits. Moto2™ World Championship leader Remy Gardner and Red Bull KTM Ajo teammate Raul Fernandez will be getting their first taste of a MotoGP™ machine, a “treat” from the factory ahead of their full-time debuts.