Round 3 of the mi-bike Motorcycle Insurance ASBK Superbike Championship, Presented by Motul, was held over the weekend. A record crowd witnessed the closest and most thrilling racing in ASBK for years, with the Superbike Finale a highlight. Report: MA Pics: Optikal. 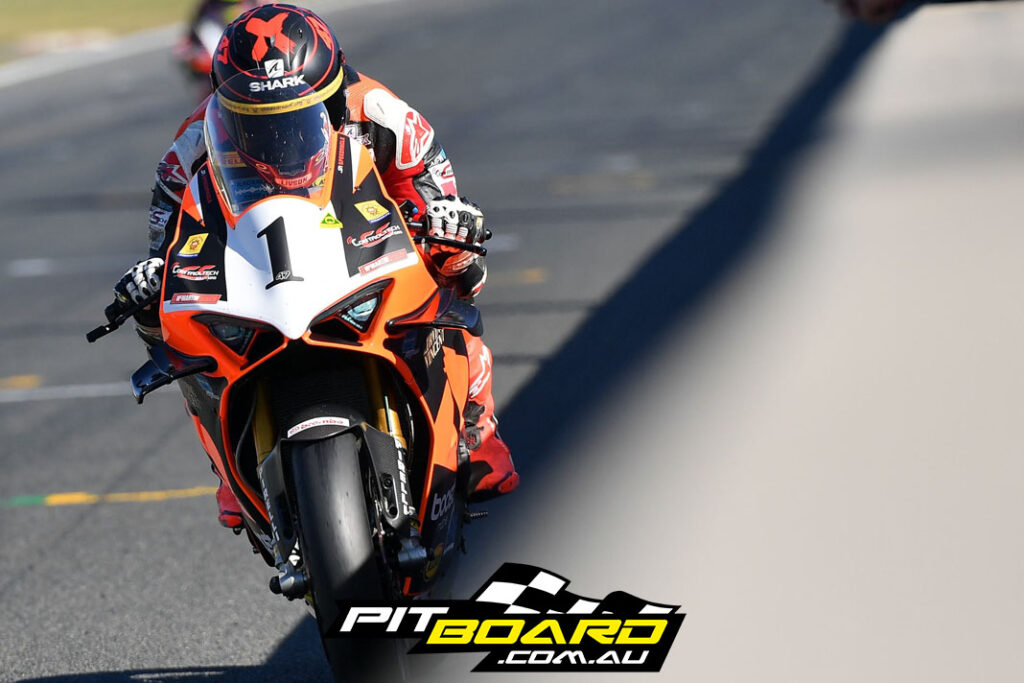 SUPERBIKE
Wayne Maxwell and Troy Herfoss have c each taken a race victory in the Alpinestars Superbike class at Round 3 of the mi-bike Motorcycle Insurance Australian Superbike Championship, presented by Motul, at Wakefield Park today. In the opening race, Maxwell and Herfoss ran nose-to-tail in the top two positions, gradually extending their lead over third-placed Mike Jones. However, the race was cut short after 13 laps when a nasty crash for Brendan McIntyre at turn one necessitated a red flag stoppage. 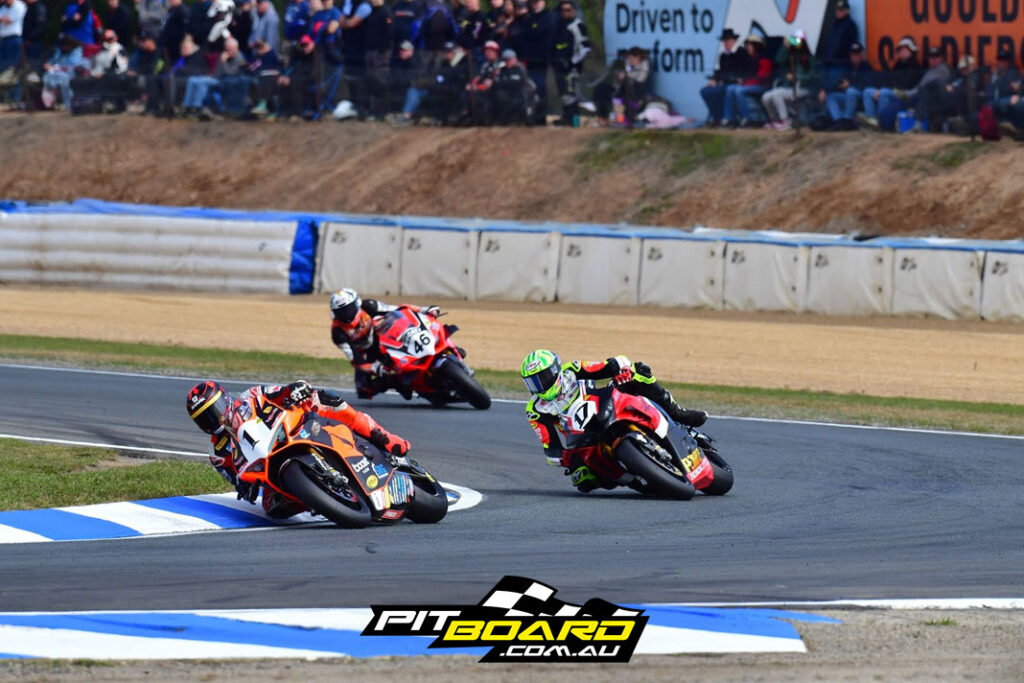 Maxwell and Herfoss were both left disappointed by the race’s premature conclusion. “It’s not ideal, obviously with people crashing and yellow flags makes its difficult,” Maxwell said. “But it was another great battle between Troy and I on different bikes, with different tyre brands.”
“I was disappointed by the fact we had to stop racing, when for us the race hadn’t essentially started yet,” Herfoss said. “I could tell Wayne was in a groove there and I felt like it could have been anyone’s race. We were going really fast at the start, which was a bit scary.” 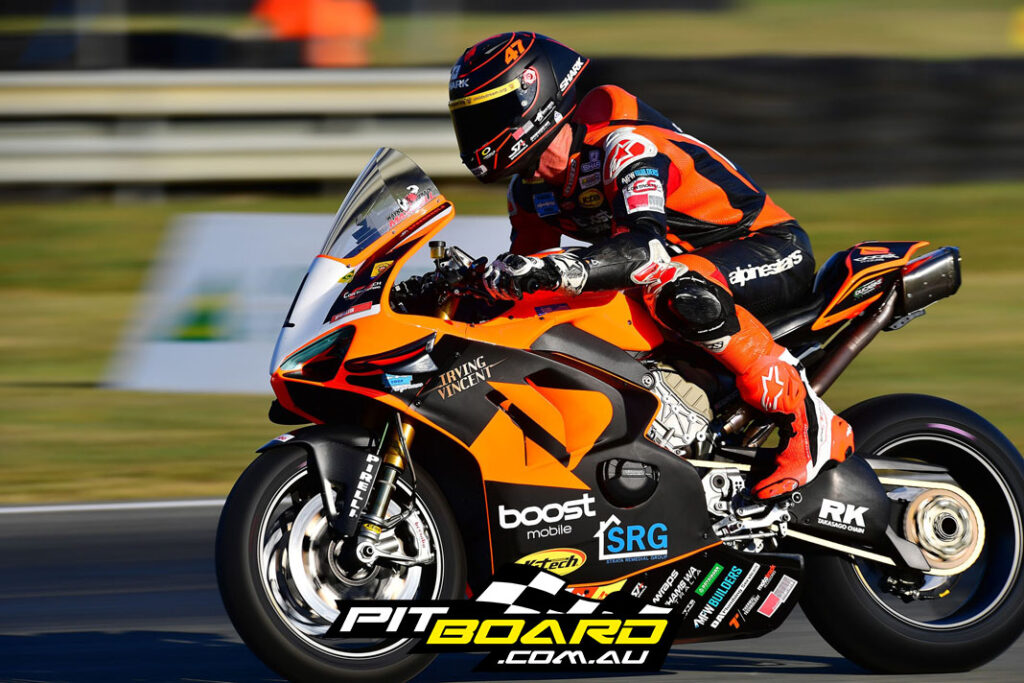 In Race 2, Mike Jones led initially, but was soon overtaken by Maxwell into the final corner. Herfoss slipped back to third off the line and spent the first two thirds of the race behind Jones, before finally passing the DesmoSport Ducati rider on the exit of turn two. With just a handful of laps remaining, the stage was set for an epic chase between the long-time rivals. Herfoss was able to close down the margin and launched a successful attack on Maxwell at turn eight on the final lap, much to the delight of the Goulburn crowd. With Maxwell having announced his retirement at the end of the 2021 season, Herfoss basked in the thrill of their final on-track battle at the Wakefield Park circuit. 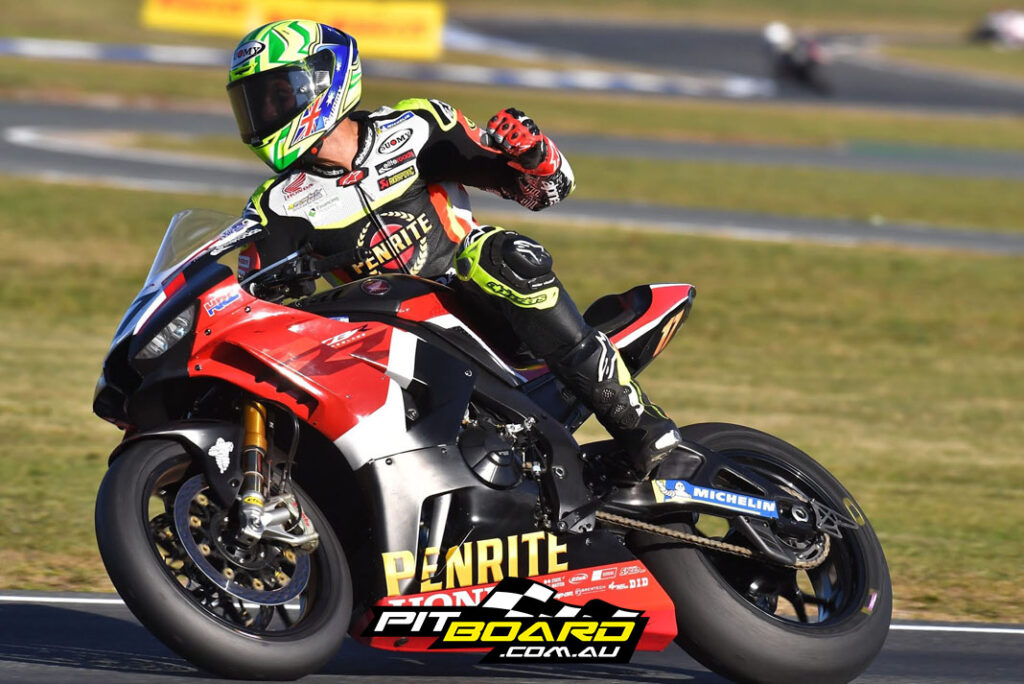 “I always believed that in a fight to the end I could win it, but there were a few laps there, after I passed Mike, where I was struggling with grip and thought I would have to settle for second,” Herfoss said. “I was really strong over the top of the track, Wayne was really strong in the last section. When I passed him, I was right on the inside line because he was so strong into the last turn. “It’s a bit sad to think it’s our last battle around Wakefield – I want to say a big congratulations to Wayne because since 2014, we’ve gone toe-to-toe around here.”
Jones was again third in Race 2 ahead of Cru Halliday and Glenn Allerton. 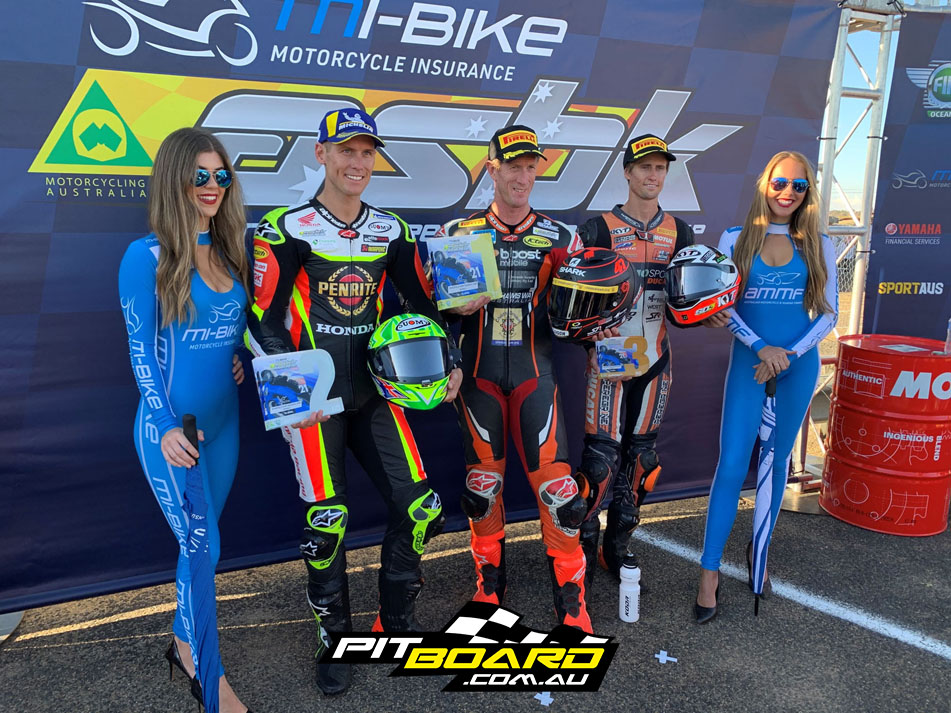 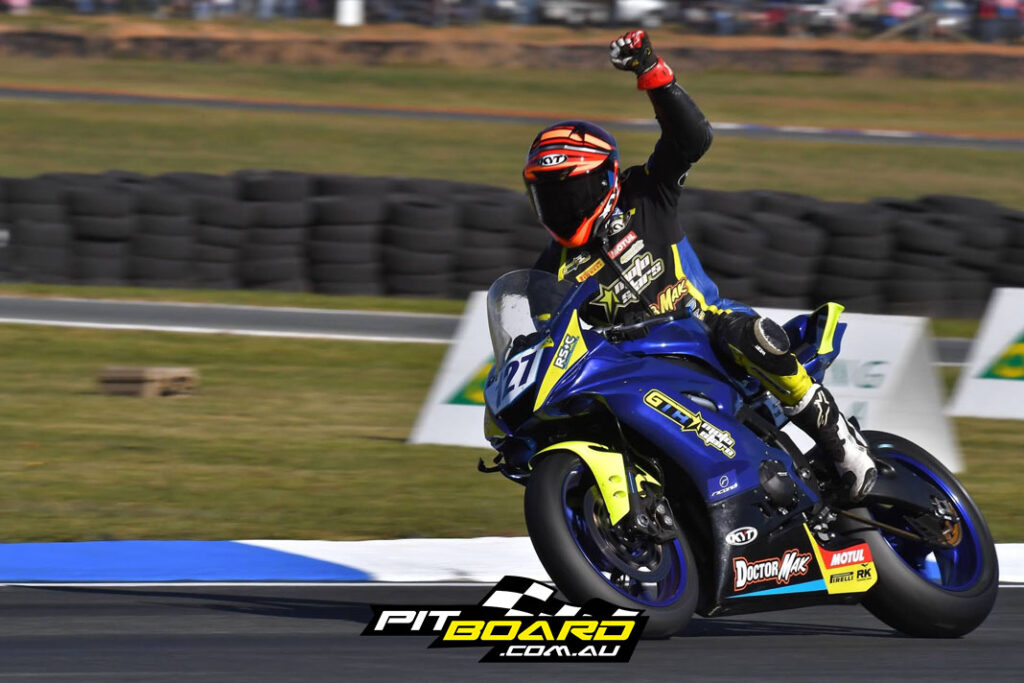 SUPERSPORT 600
Broc Pearson has moved into the MotorsportsTV Supersport Championship lead after taking the overall win in Round 3 at the Wakefield Park round of the mi-bike Motorcycle Insurance Australian Superbike Championship, presented by Motul, while Max Stauffer scored his first victory in the category. Pearson led the early stages of Race 1 before a red flag due to an incident; when the race restarted, Pearson slipped back to third behind Stauffer and Tom Edwards, but was able to recapture the positions before the finish. In the second race, Pearson again led initially but Stauffer stayed within striking distance, despite a big moment at turn seven at one stage. With a few laps remaining, Stauffer seized the lead with a breathtaking move on Pearson into the first corner, before riding to victory. 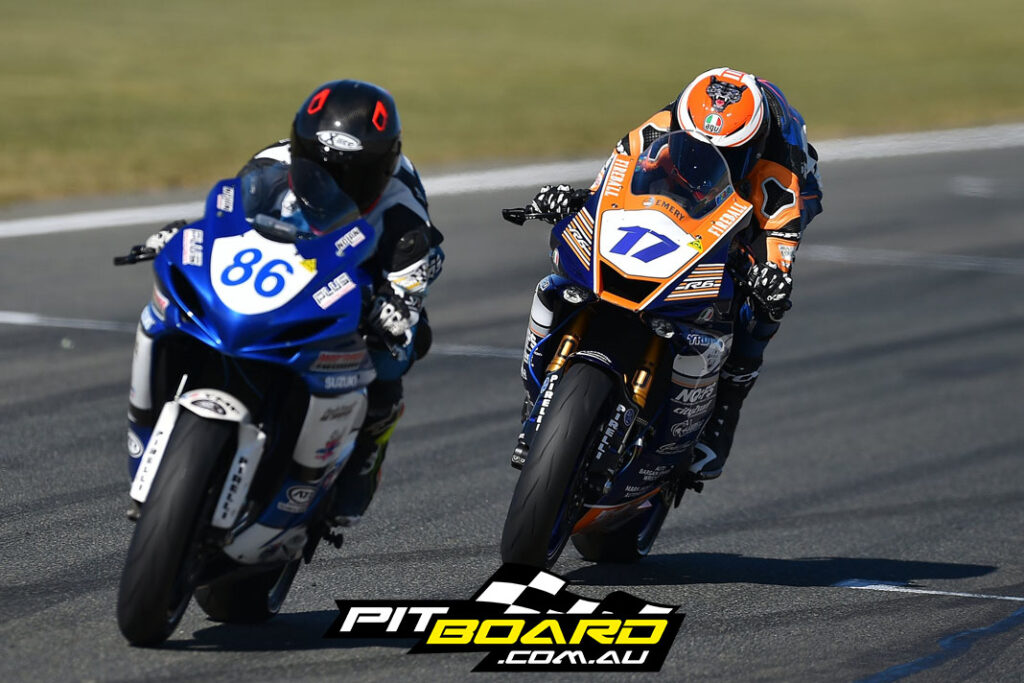 “After the first race, I was a bit down on myself, only coming third after leading with a few laps to go,” Stauffer said. “The whole team worked so hard after Winton, so it’s very satisfying to reward them like this”. 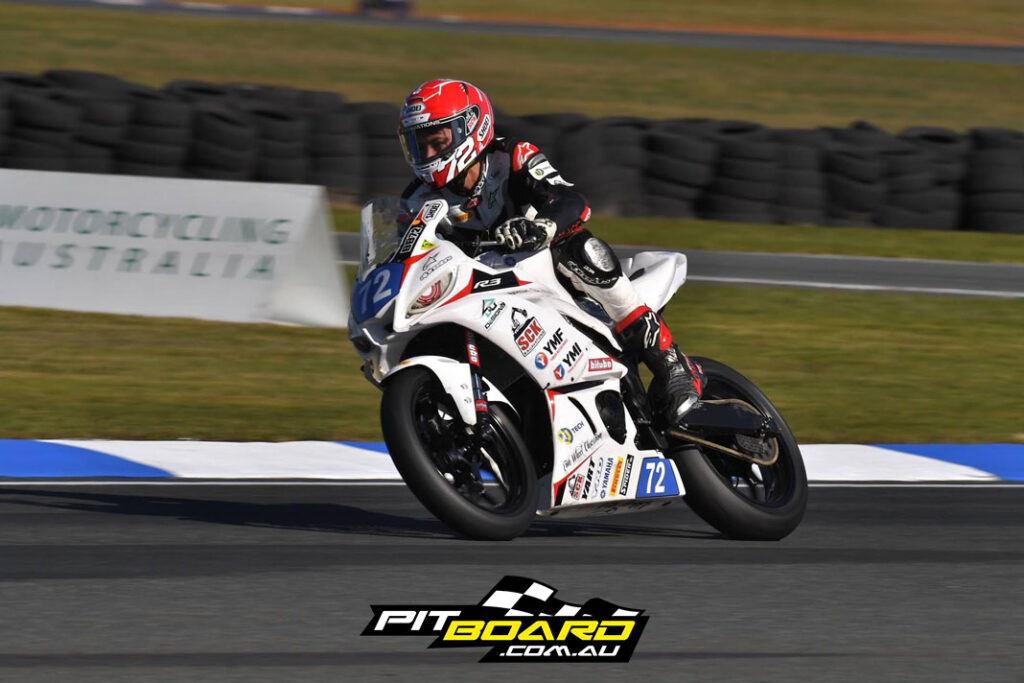 SUPERSPORT 300
Ben Baker continued his winning streak with another two race victories ahead of Zackary Johnson, who chalked up another pair of second-place finishes. Angus Grenfell and Cameron Dunker were third in today’s two races, but it was Archie McDonald who scored the final overall podium position with a trio of third-place finishes.

“This is by far the best weekend of racing I’ve ever had,” Baker said. “Wakefield has always been my favourite racetrack and now it’s even more special”. 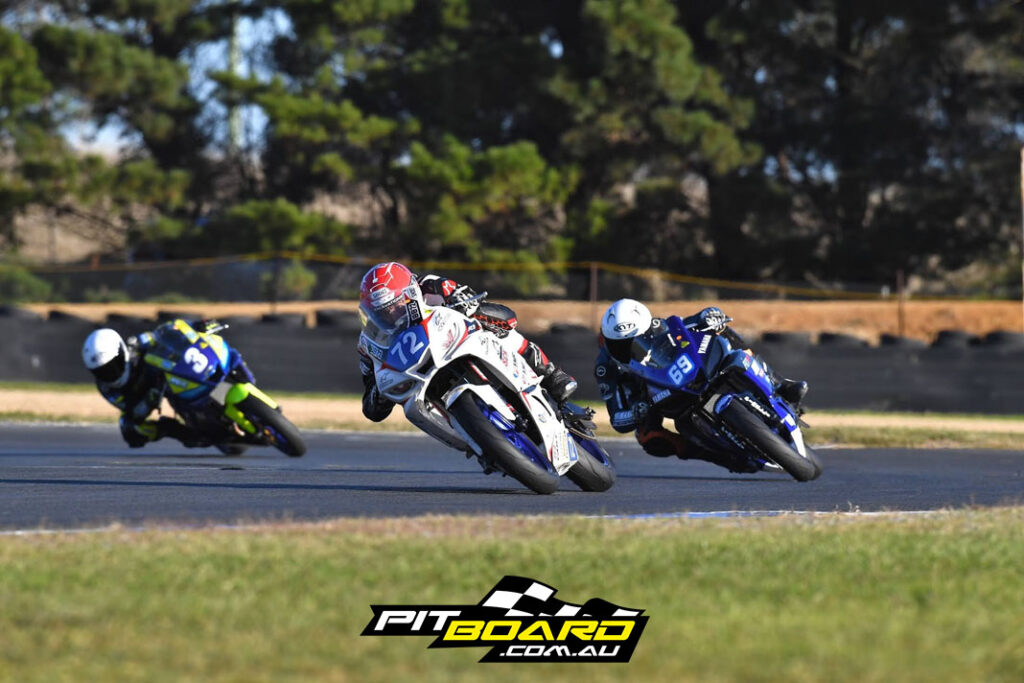 R3 CUP
Ben Baker’s perfect weekend carried over to the R3 Cup, where he also won all three races and broke the lap record. Archie McDonald was second overall ahead of Angus Grenfell, who edged out Cameron Dunker for the final podium position by a solitary point.

“This is as good as it gets – a massive thanks to Yamaha and all my other supporters, I can’t wait for Morgan Park,” Baker said. 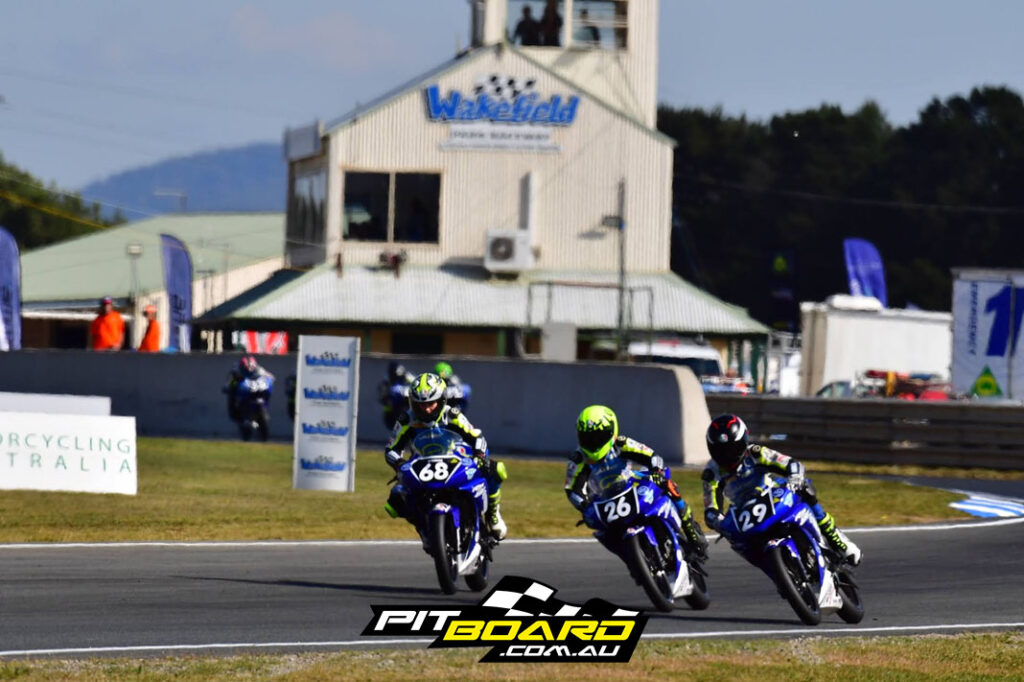 OCEANIA JUNIOR CUP
Cameron Swain may have won the overall OJC round, but his streak of race wins finally came to an end in the third and final race when he was relegated to third position by Hayden Nelson and Ryan Larkin in a photo finish, the three riders separated by just 0.012s. Nelson was thankful to chalk up a race win after a crash ruled him out of the previous round at Winton. “It was pretty crazy out there – we were touching a lot,” Nelson said. “I crashed at Winton, had concussion and couldn’t race, so it was good to come here and get my first win of the season”. 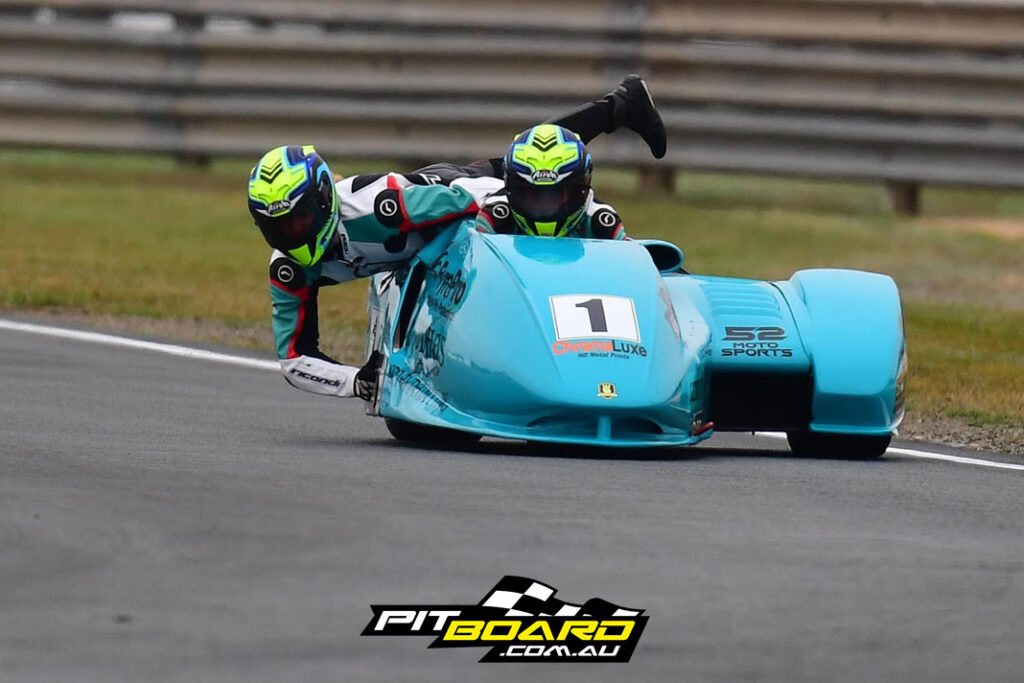 SIDECAR
Corey and Danyon Turner notched up another win in the final Sidecar race of the weekend, with Pat Clancey/Stephen Bonney scoring another second place finish to win the F2 Class. Stuart and Brad Gorrie were third outright (second in the F2 class).

After not quite getting my request in early enough the year previous for the chance to do some laps on...
Read
MotoGP News

The racing in the FIM Enel MotoE World Cup is truly some of the best. That's never been more true than...
Read
MotoGP News

The racing in the FIM Enel MotoE World Cup is truly some of the best. That's never been more true than...
Advertisment