An exciting weekend in France for MotoE. It went down to the wire in an all-Italian duel, Casadei took home his first win, with Aegerter and Okubo ultimately completing the podium in race one.  Aegerter gets back on top and denies Casadei, with Canepa taking a first MotoE podium in third in race two…

Mattia Casadei (Pons Racing 40) is now an FIM Enel MotoE™ World Cup race winner! The Italian veteran saw off a serious challenge from compatriot Kevin Zannoni (Ongetta SIC58 Squadra Corse) in Race 1 at the SHARK Grand Prix de France to take his maiden win in the Cup. Zannoni threw everything into his bid for victory, but hit the deck on the final lap when he asked too much of his front tyre at Turn 13. Nevertheless, the speed was a warning shot for Sunday…

After that drama ahead, Dominique Aegerter (Dynavolt Intact GP) took second place and a valuable 20 points, with Hikari Okubo (Avant Ajo MotoE) completing the podium in a first rostrum finish for the Japanese rider.

There was drama as soon as the race started when Casadei’s team-mate and reigning Cup winner Jordi Torres fell in the pack as the they exited the Turn 3/Turn 4 chicane. Neither Niccolo Canepa (WithU GRT RNF MotoE™ Team) nor Xavi Fores (Octo Pramac MotoE™) were able to fully avoid the stricken Spaniard, but after a check up at the medical centre Torres was confirmed with a broken fibula; unfit but otherwise ok.

The net result of that opening lap was that Casadei led Zannoni, Okubo and Aegerter, with Casadei looking like he might break away. However, he was reeled in by Zannoni as the eight-lap contest reached its halfway mark.

After biding his time for a handful of laps, the SIC58 rider then had a big look at race leader as they sped through Turn 1/Turn 2 for the final time. Casadei fended off that attack but Zannoni did not give up, pusing to the limit and then sadly just over it as his challenge came to an end at the penultimate corner when he folded the front. Rider ok, and surely eager to recharge for a Race 2 charge.

Up ahead, Casadei won unflustered by 0.8 seconds, while Aegerter had hustled past Okubo at Turn 3 on the second-last lap. Okubo was a maiden podium finisher in third though, just ahead of Matteo Ferrari (Felo Gresini MotoE™), Hector Garzo (Tech3 E-Racing), Miquel Pons, and Eric Granado. The latter two, team-mates at the LCR E-Team, had managed to stay upright despite contact exiting Turn 14 in the closing stages of the race. 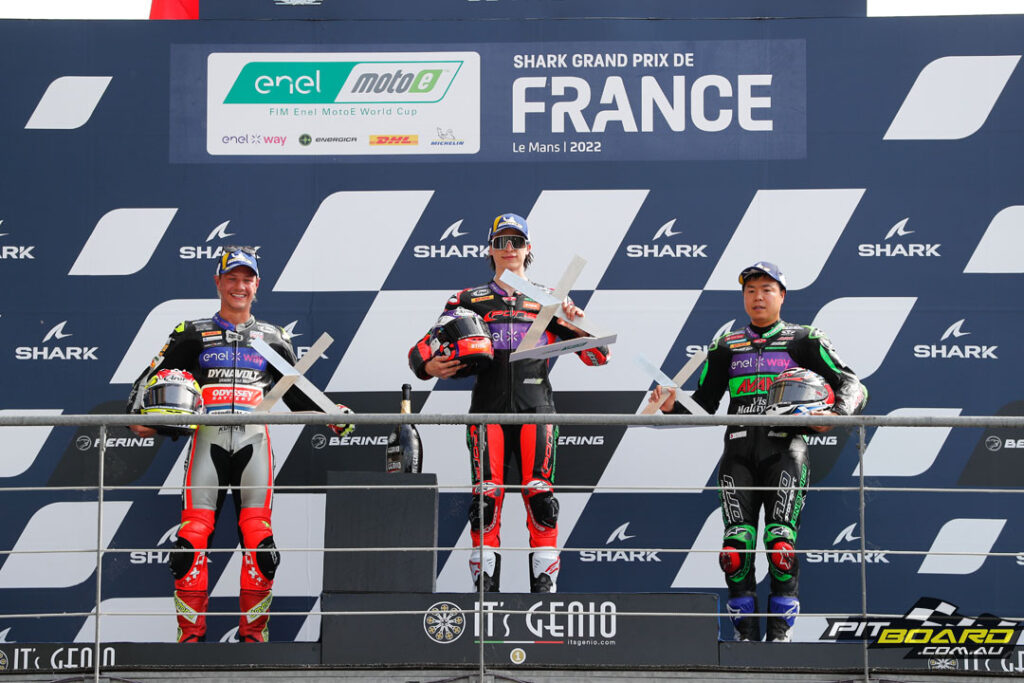 Race Two
Dominique Aegerter (Dynavolt Intact GP MotoE) is back on top in the FIM Enel MotoE World Cup! The Swiss rider put in a masterclass at the SHARK Grand Prix de France to take his first win in the Cup since 2020, and in doing so put himself back on top in the standings, too. The fight for victory went all the way down to the final lap, with Aegerter passing Mattia Casadei (Pons Racing 40) for the lead and affording the Italian no right to reply. Joining them on the podium for the first time in MotoE came Niccolo Canepa (WithU GRT RNF MotoE™ Team), with the Italian beating compatriot Kevin Zannoni (Ongetta SIC58 Squadra Corse) to the line by just 0.008 seconds.

Casadei took the spoils in Race 1 on the afternoon prior at Le Mans and, from pole position, he took the early lead in Race 2 as well. Aegerter lost two positions off the start before getting both back, the Swiss rider passing of Hikaro Okubo (Avant Ajo MotoE™) and then Zannoni at Turn 3 on Laps 2 and 3 respectively. That put him in clear air behind Casadei, beginning to chip away at the Italian’s one-second lead.

There was plenty of shuffling for position behind, but Aegerter was on a singular mission at the front and with a couple to go, the number 77 was right on Casadei to make it a duel for the win. By the time the two were approaching Turn 3 on the final lap, it was go time and Aegerter struck with a decisive move for the lead. Casadei stayed close but couldn’t quite bridge the gap back, with the Swiss rider keeping it pinned for his first MotoE™ win of the year and first since 2020, just over half a second in hand at the flag.

While the contest for victory was only settled late in the race, the final podium position was not even locked in until right at the finish line. In the early stages, it was pre-race points leader Eric Granado (LCR E-Team) on a charge, dropping as low as eighth on Lap 1 but getting into the top five when he passed Matteo Ferrari (Felo Gresini MotoE™) at the start of Lap 4. On Lap 5, he used a cutback to overtake Okubo for fourth spot as they accelerated off Garage Vert, but then the Brazilian found himself under threat.

Canepa took advantage of Okubo’s attempt to immediately hit back at Granado, and the Italian picked the Japanese rider’s pocket at Chemin aux Boeufs to set off a duel with Granado. The battle was settled by a decisive move from Canepa on the penultimate lap as the Italian just edged away, next locking onto the back of Zannoni up ahead and the final place on the podium.

The number 7 just got it done and stayed ahead, joining Aegerter and Casadei on the podium by just a few thousandths of a second. Zannoni was denied the rostrum once more but took a much bigger chunk of points from Race 2, with Granado completing the top five.

Okubo and Ferrari crossed the line just behind in sixth and seventh, with Hector Garzo (Tech3 E-Racing) moveing up from his grid position to eighth. Xavi Fores (Octo Pramac MotoE™) and Xavi Cardelus (Avintia Esponsorama Racing) were ninth and the tenth at the flag but both took three-second penalties for a shortcut and failure to comply with a Long Lap penalty, respectively, so the top 10 was rounded out by Marc Alcoba (Openbank Aspar Team) and Miquel Pons (LCR E-Team). 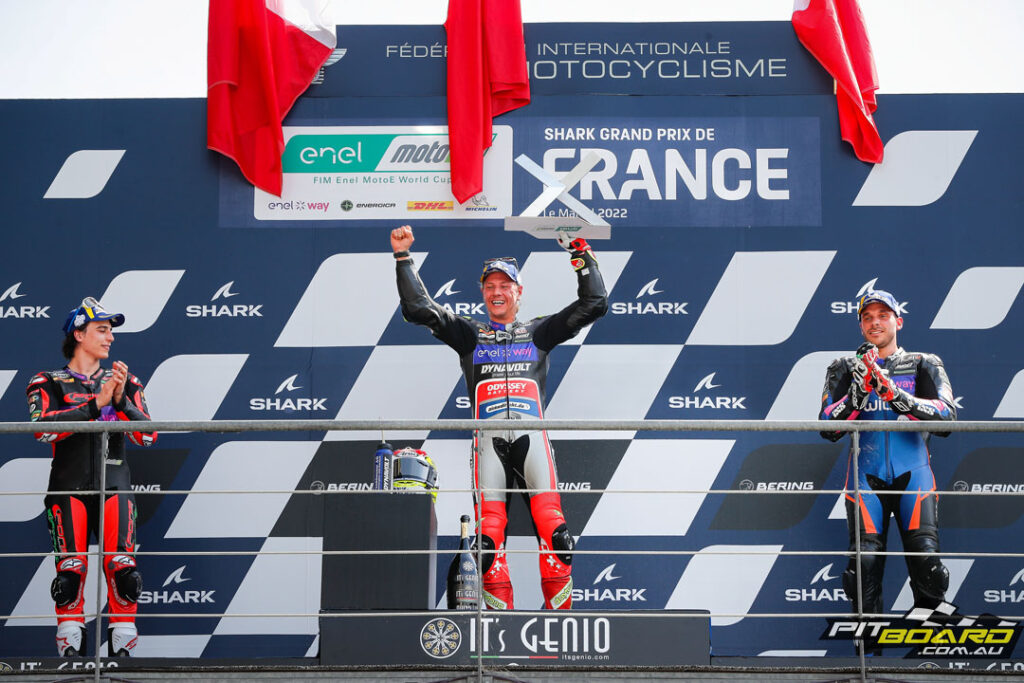 Jordi Torres did not start the race after sustaining a broken left fibula when he crashed on the opening lap of Race 1, but was in good spirits as he stayed at Le Mans to cheer on Pons Racing 40 team-mate Casadei… saying he is hoping to be back at Mugello.

Granado won both races when the season began in Jerez, but Aegerter’s first MotoE™ win since 2020 has helped him go to top of the standings, with an eight-point margin over the Brazilian. Casadei, who matched Aegerter’s 45 points for the Le Mans weekend, is nine points further behind in third. That’s it from Le Mans, but the FIM Enel MotoE™ World Cup is back again in just a fortnight as the Gran Premio d’Italia Oakley lights up the  spectacular Autodromo Internazionale del Mugello.

Maitland, NSW will host Round 5 of the 2022 Penrite ProMX Championship presented by AMX Superstores this Sunday. Officially kick-starting...
Advertisment