The racing in the FIM Enel MotoE World Cup is truly some of the best. That’s never been more true than of Race 1 at the TT Circuit Assen, with just 0.081 covering the podium as Dominique Aegerter (Dynavolt Intact GP MotoE™), Eric Granado (LCR E-Team) and Mattia Casadei (Pons Racing 40) took the show to the wire. 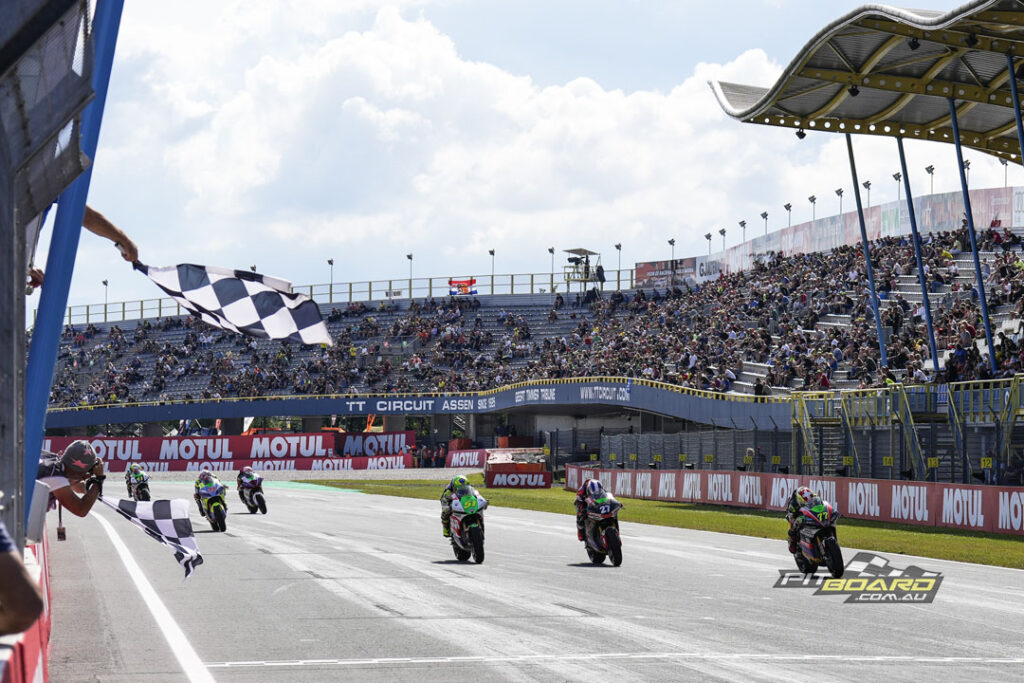 Aegerter had qualified on pole but the battle for the lead was initially between Granado and Casadei, who went side-by-side into the first corner. However, both ran wide exiting Haarbocht and Matteo Ferrari (Felo Gresini ) emerged in the lead, ahead of Aegerter and Miquel Pons (LCR E-Team). Granado and Casadei slotted into fourth and fifth, but both were back ahead of Pons within a lap.

Granado soon proved the master of the fast Ramshoek left-hander, overtaking Aegerter there on Lap 3 just when it looked like Ferrari might be starting to creep away, then passing the 2019 World Cup winner himself another lap later again. Ferrari reclaimed the lead from the Brazilian as they ran through the Ossebroeken section on Lap 5, but Granado got back in front later that lap at Stekkenwal. 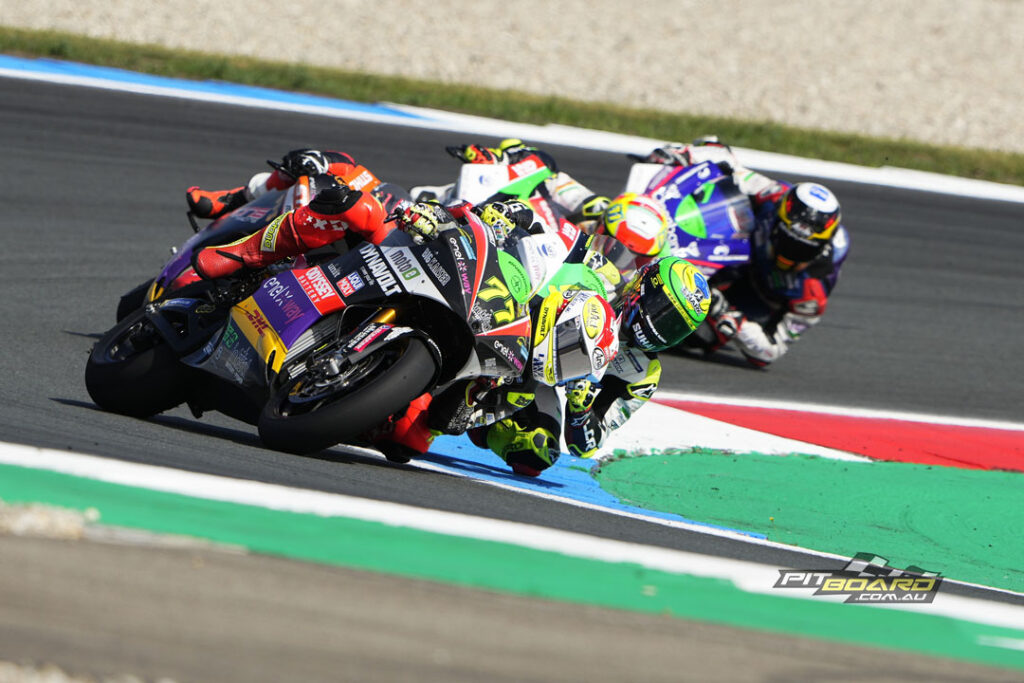 Meanwhile, a big battle had broken out for third between Aegerter, Casadei, and Pons, but the current World Cup leader had shaken those off when he launched an attack on Ferrari. He squeezed past the Gresini rider into the Geert Timmer Chicane on Lap 6, and Ferrari dropped towards the back of the leading pack when he had two big wobbles as he tried to take second position back at the start of Lap 7, with Casadei inheriting third position.

Aegerter then got underneath Granado at Strubben, but that gave them a slow entry down the back straight and Casadei stormed by both  on the run into the Ruskenhoek, before Granado then re-passed Aegerter. The Swiss rider snatched the spot back just a few corners later at the Geert Timmer Chicane though, and making a little contact as he did so and that losing Granado a handful of tenths. 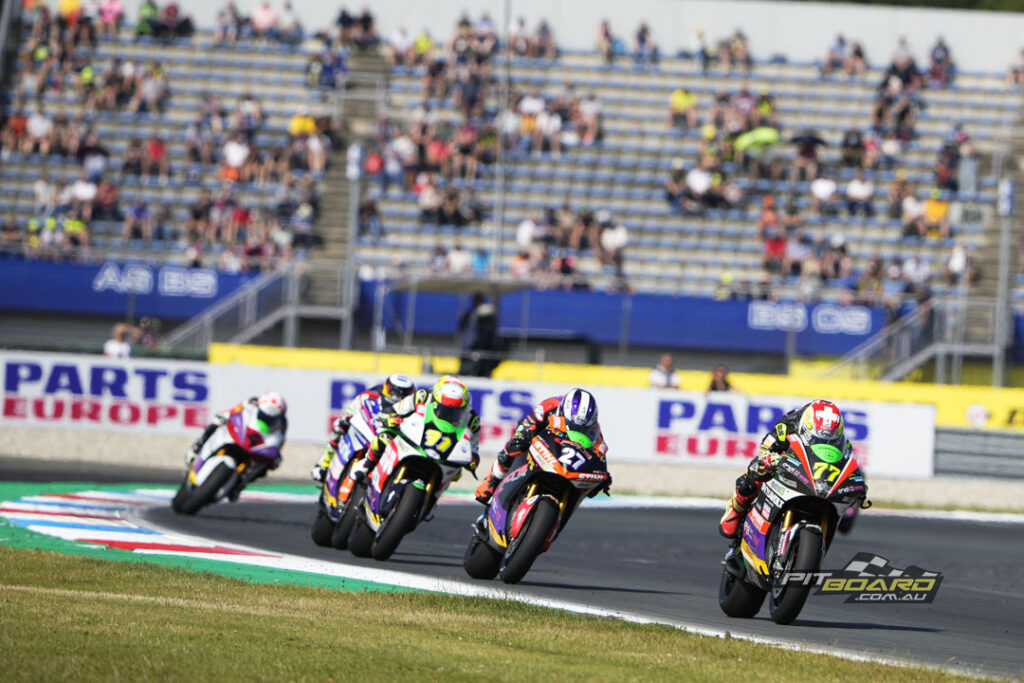 Despite being back in the runner-up position with a lap to go and a World Cup lead to protect, Aegerter didn’t seem in the mood to simply collect points. He dived past Casadei at Strubben but could not make the move stick and very nearly got chucked off his Energica Ego Corsa when he opened up the throttle again. Still, the Swiss rider tried again at Ramshoek near the end of the lap, but it all came down to the final chicane.

Granado was back on their tail as Aegerter went for the lead just ahead, and the Swiss rider just about shut the door on Casadei to secure the win. Granado needed no second invitation to try his own attack, blasting just past the Italian to grab second by mere thousandths to take second. 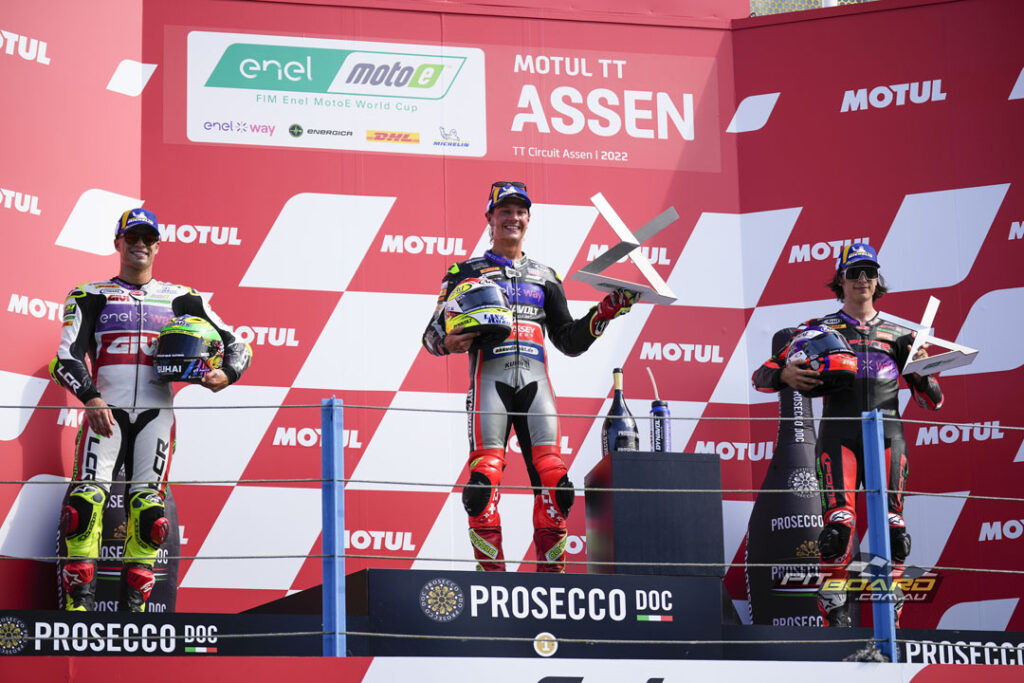 After some early heroics and then excellent damage limitation, Ferrari took fourth ahead of Hector Garzo (Tech3 E-Racing) in fifth, just 0.960 seconds behind the winner. Marco Alcoba (Openbank Aspar Team) had been in the leading group on the last lap but crashed at high speed at the Ramshoek, with an x-ray clearing him of a fractured left elbow but another medical review coming on Sunday.

Sunday
Eric Granado (LCR E-Team) was rewarded for his bravery in tricky conditions as the Brazilian took victory in Race 2 of FIM Enel MotoE™ World Cup at the Motul TT Assen. The number 51 scythed his way from fourth to the lead in just three laps in a contest which would be cut short due a Red Flag, with points leader Dominique Aegerter (Dynavolt Intact GP MotoE™) claiming second and Mattia Casadei (Pons Racing 40) completing the podium.

The Red Flag saw Miquel Pons (LCR E-Team) crash out and suffer contact from Marc Alcoba (Openbank Aspar Team), with the LCR rider conscious and getting a check up at the circuit before heading to local hospital in Groningen for a CT scan to his pelvis. 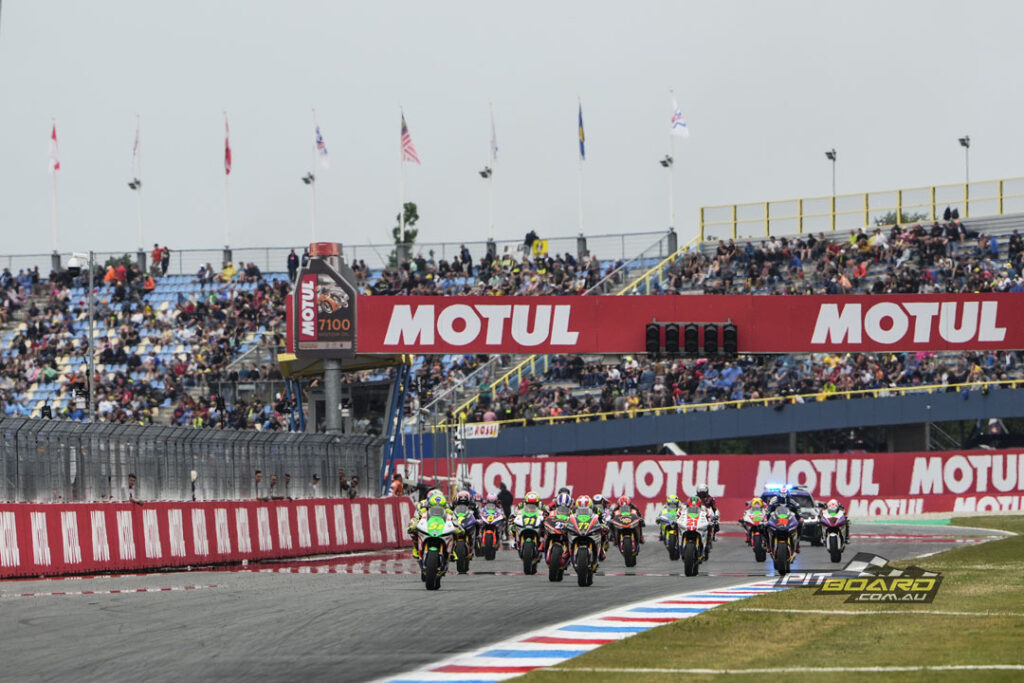 Before the flag was thrown, however, it was a five-wide run to the first corner when the action finally got underway, with patchy showers having twice delayed the start. Casadei came from fourth on the grid to lead the field into the first corner, while Aegerter fended off an early challenge from Matteo Ferrari (Felo Gresini MotoE™) at Strubben, and then again at De Bult, to end the opening lap in second, with Granado just behind them.

The riders had no time to waste, with the delays seing the originally distance of eight laps cut to six, and Granado was a man on a mission. He passed Ferrari as they turned into Haarbocht at the start of Lap 2 although, in doing so, he made room for Pons to follow him. A brief battle between the LCR duo ensued before Granado shook off his teammate and attacked Aegerter. 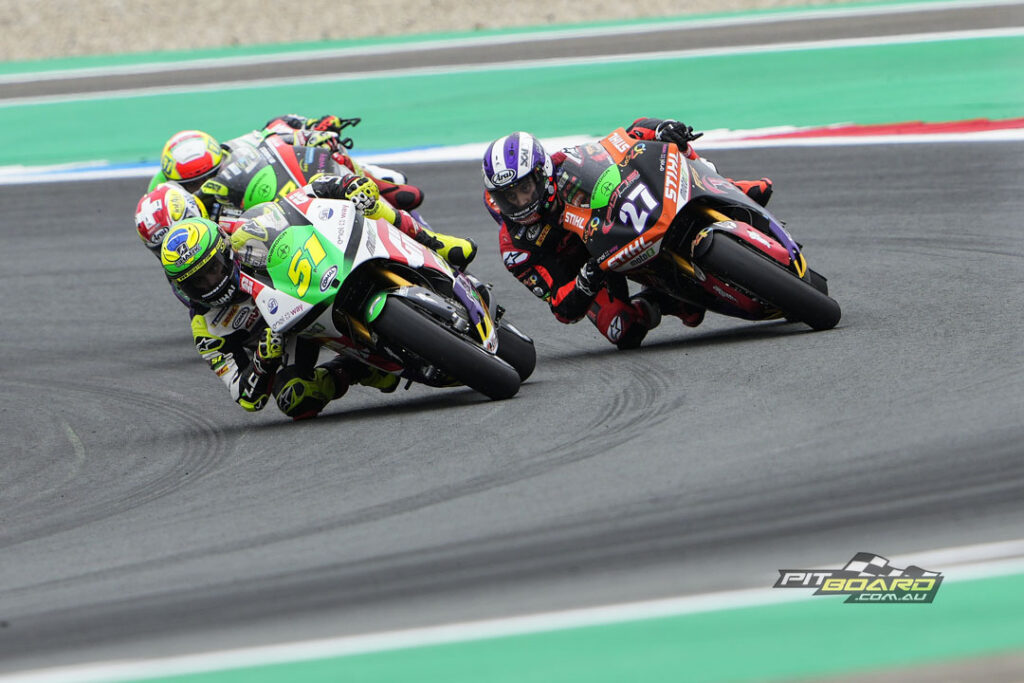 Incredibly, as the rain flags flew again, Granado passed Aegerter around the outside of the high-speed Ramshoek left-hander, then went down the inside of Casadei when they arrived at Haarbocht again on Lap 3. Ferrari got back underneath Pons three corners further around at the Ossebroeken complex and, unfortunately, that was just the start of the LCR rider’s troubles.

Exiting the following corner, De Strubben, Pons highsided and was thrown from his motorcycle. Running two bikes back, Marc Alcoba was unable to avoid it and also crashed. Alcoba eventually remounted but, as Pons was initially attended to at the side of the track, the race was red flagged on Lap 4. Soon after news came through it would not restart, and instead half points would be awarded. 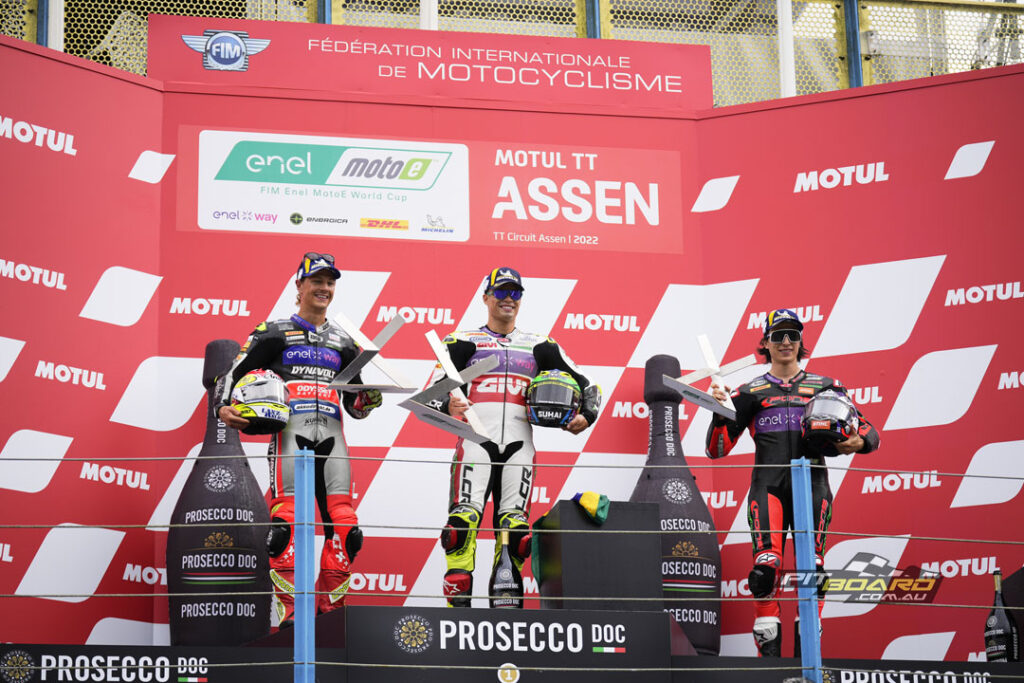 In the FIM Enel MotoE World Cup standings, Aegerter has now moved to 158 points, but Granado closes in slightly in second on 126.5 points, with Ferrari third on 112.5. Action in the electric class resumes with the Motorrad Grand Prix von Österreich, at the Red Bull Ring on August 19-21!

In the middle of the night on Friday, multiple ASBK teams and riders were awoken by loud and persistent rainfall...
Read
MotoGP News

Wayne Maxwell has taken the maximum 51 points – two race victories plus the extra point for pole position- as...
Advertisment

Wayne Maxwell has taken the maximum 51 points – two race victories plus the extra point for pole position- as he undertakes a desperate...

In the middle of the night on Friday, multiple ASBK teams and riders were awoken by loud and persistent rainfall falling on Morgan Park...

Wayne Maxwell has taken the maximum 51 points – two race victories plus the extra point for pole position- as he undertakes a desperate...

In the middle of the night on Friday, multiple ASBK teams and riders were awoken by loud and persistent rainfall falling on Morgan Park...