Eric Granado (LCR E-Team) is the first electric winner of the season! The Brazilian took victory in the first and second race of the 2022 FIM Enel MotoE World Cup at the Gran Premio Red Bull de España, making a flawless weekend for Granado…

Granado sliced his way through to beat second place Dominique Aegerter (Dynavolt Intact GP MotoE) by 0.6s, with third and the final place on the podium going to Matteo Ferrari (Felo Gresini MotoE) after a little drama in Race 1. That was a clash between polesitter Miquel Pons (LCR E-Team) and Mattia Casadei (Pons Racing 40), with the two making contact at Turn 13, the latter crashing out. Pons was given a Long Lap penalty for the incident, which subsequently became a time penalty as the number 71 ran out of time to take it – keeping him off the podium.

Hector Garzo (Tech 3 E-Racing) and Casadei were the early battle for the lead, but by the halfway mark of the eight-lap race, a leading quintet formed at the front. Granado made his way through and took the lead for the first time at Turn 13 on Lap 6, making a pass stick on Casadei. Pons, meanwhile, had pounced on Garzo and then saw a gap appear underneath Casadei as Granado made his move ahead. The number 71 tagged Casadei and the Italian went down, rider ok but the incident shuffling the pack too.

Granado was clear of the drama in the lead, but behind Pons emerged second, Aegerter third, and Ferrari was up to fourth ahead of reigning Cup winner Jordi Torres (Pons Racing 40). Garzo dropped to sixth after avoiding the stricken Casadei at the final corner.

Pons’ Long Lap Penalty for ‘irresponsible riding’ was then announced during the final lap, but neither he nor Aegerter had chance to act on that before the chequered flag. The Swiss rider instead pulled off a move at Turn 9, set up as he swarmed round the outside of Pons through Turn 8.

Keeping it pinned, Granado took the chequered flag 0.696 seconds ahead of Aegerter for his sixth race win in the World Cup, with Pons crossing the line in third. The penalty saw him demoted to eighth once a three seconds had been added for not taking the Long Lap, giving Ferrari that first podium of the season as the Italian was just behind over the line after a solid start to 2022.

Garzo took fourth and Torres completed the top five to kickstart his title defence, with Hikari Okubo (Avant Ajo MotoE) and rookie Alex Escrig (Tech3 E-Racing) next up. The aforementioned Pons was classified P8, and rounding out the top 10 for the first time in 2022 were Marc Alcoba (Openbank Aspar Team) and Lukas Tulovic (WithU GRT RNF) – the German doing a good job standing in for the injured Bradley Smith despite no testing. 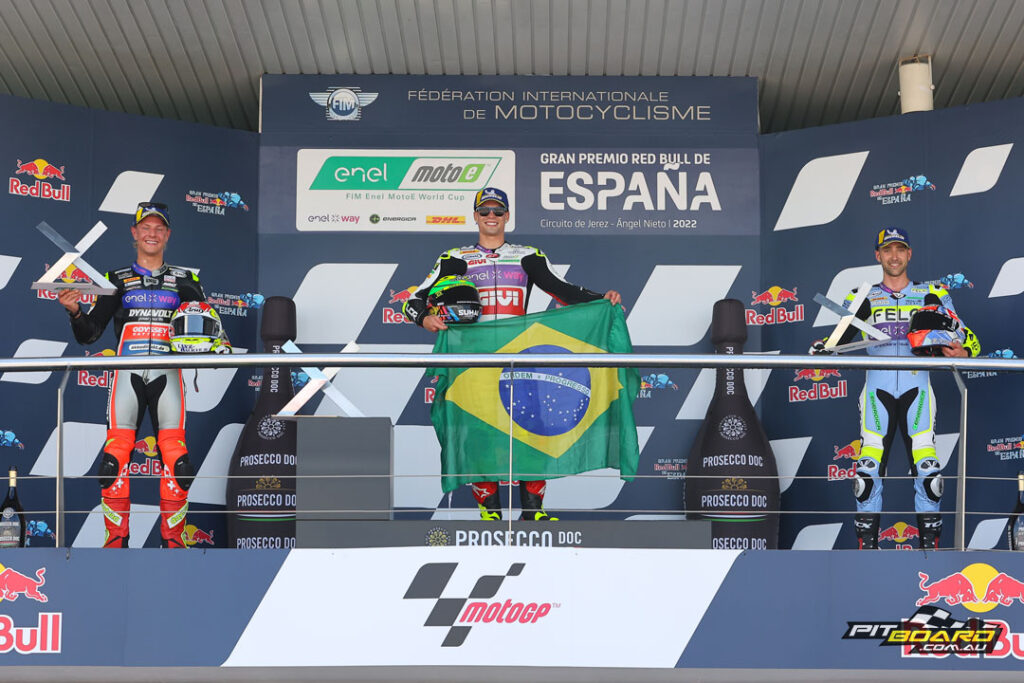 Race Two
Patience was key for Eric Granado as he made it two from two in the opening weekend of FIM Enel MotoE World Cup action, the Brazilian doing the double in style at the Gran Premio Red Bull de España. It was an LCR E-Team one-two after he passed team-mate Miquel Pons midway through the final lap around the Circuito de Jerez-Angel Nieto too – the first time the Brazilian had led all race.

For the second day in a row, Hector Garzo (Tech3 E-Racing) got the holeshot from the middle of the front row, but he held the lead only until Turn 5, where Casadei went down the inside. The running order got a shake-up when seemingly everyone went deep into Pedrosa Corner at the other end of the back straight though, and Aegerter emerged in first ahead of pole-sitter Pons and a rider who had started all the way back in eighth: Hikari Okubo (Avant Ajo MotoE). Fourth at that point was Garzo, ahead of Casadei and Granado.

Pons was back to where he started when he overtook Aegerter at the final corner at the end of Lap 1 though, the number 71 leading the way as Okubo went the other way; passed by both Garzo and Granado on Lap 2. The top four then quickly broke away from the rest, but after Granado sliced past Garzo at the end of Lap 2, it quickly became clear that the battle for victory was going to be a race in three. Even so, the previous day’s winner seemed content to watch Pons and Aegerter chop and change at the front of the field.

Aegerter’s preferred passing zone was Turn 9, while Pons was better under brakes at Turn 6, and the lead switched and switched. Granado, meanwhile, was lying in wait, and the patience paid off as the final lap began. Aegerter made a lunge at Pons at Turn 1 but the Swiss rider went deep – too deep – and Granado took his chance to grab second, then setting his sights on his teammate.

The Brazilian was then able to get the run down the back straight and out-brake Pons at Turn 6, thereafter keeping it pinned to beat his teammate to the chequered flag by 0.217 seconds. In all the shuffling at the front, Casadei had also tagged onto the podium fight and he pinched third late on as he dived up the inside of Aegerter at the final corner, rubbing proving racing on this occasion as the Italian found some better luck on Sunday.

Garzo was a surprise non-finisher, the Spaniard crashing when he tried to hang in there on the outside line as Casadei overtook him for fourth at the Lorenzo Corner on Lap 5. Marc Alcoba (Openbank Aspar Team) took a tumble at the end of Lap 1 after a tangle with Lukas Tulovic (WithU GRT RNF MotoE Team), and Yeray Ruiz (Avintia Esponsorama Racing) had a fast fall at Turn 4 on Lap 4, while the other 15 riders made it to the chequered flag. 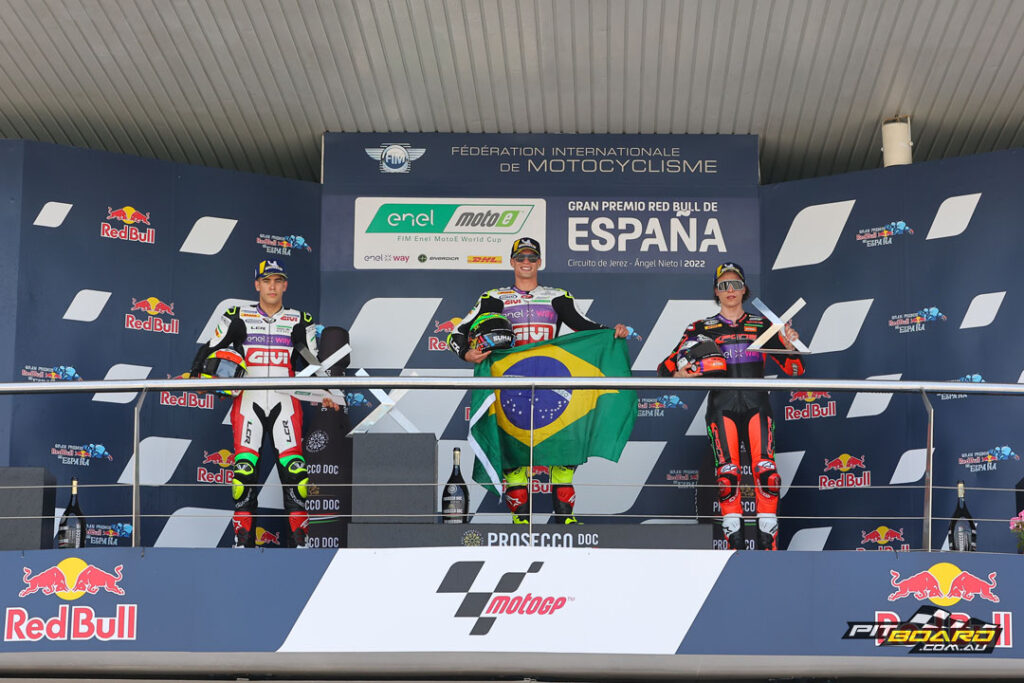 In the World Cup standings, Granado now enjoys a 17-point lead on the way into France, with Aegerter his nearest rival and Pons another five points behind in third. Can the Brazilian remain unbeaten when MotoE continues in just two weeks from now? Tune into the SHARK Grand Prix de France on 13 – 15 May to find out!